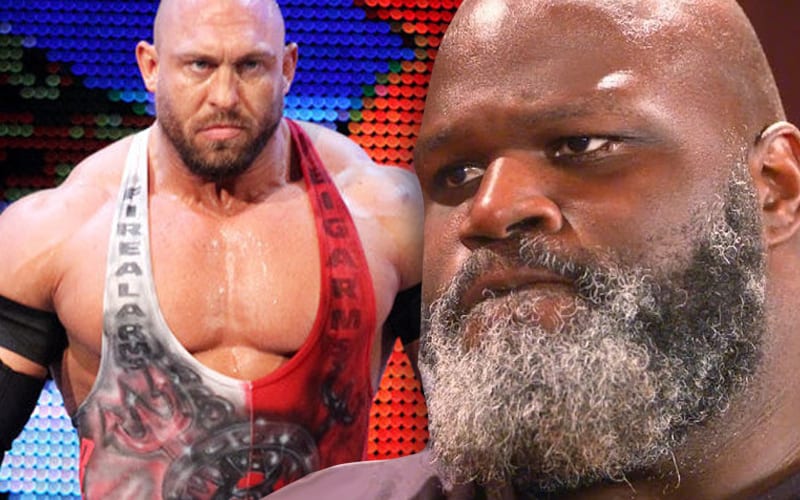 Ryback caused a bit of a storm when he went on a rant about title belts in pro wrestling being nothing but props. Jim Cornette verbally destroyed The Big Guy for those comments. Mark Henry isn’t about to let Ryback talk that way about titles either.

In case you missed it, Ryback tweeted out saying: “Wrestling is fake, guys, and the Championships are props to market entertainers as ‘Champions.’ Nobody has actually ever won or lost a prop, as scripted physical entertainment is incapable of that. This tweet explains so much though on your TV deal with them.” That rubbed a lot of people the wrong way.

Mark Henry spoke about this on Busted Open Radio, and he ripped into Ryback for being bitter. Henry worked hard for his accolades, and he’s not about to let someone like Ryback diminish them.

“Ryback can’t take away what I achieved. There’s no way that your bitter ass — and I’m talking to you, Ryback, your name is not Ryback. I don’t even know you’re real name. Skip, whatever it is — you are wrong. Every wrestler that sees your face should walk up to you and say, ‘Hey, you’re an asshole.’ And I hope you know how to fight for real because you know and I know there’s a lot of people that would whoop your ass. If I saw you, I would tell you ‘Hey man, you’re an asshole.’ And if you want it with me, you could get the first one. Go ahead, you’re punches taste like candy. And there’s a bunch of guys out there that feel the same way that I do — the way you talk sh*t on our business. I feed my family with this business.”

“This show, hey, it’s a show about wrestling. I’m not an active talent. I’m not an employee, but I love the business enough to not let you sit here and talk sh*t on it and trivialize it because you failed. Because you didn’t achieve. That you didn’t become a champion, so you feel like it’s something that’s given. It’s a prop. You’re wrong. What have you ever been a champion in outside of wrestling? Are you a champion in your own home? Do your dogs like you? Do people around you respect you for being more than a wrestler, or a musclehead? I’ve been a musclehead my whole life, and people respect me for it. You owe the wrestling industry an apology. If you don’t, I think that pro wrestlers all over the world should never give you respect.”

Mark Henry isn’t the only person who didn’t like Ryback’s comments. As a former WWE Champion, the World’s Strongest Man also has more than a right to feel some resentment toward what Ryback said as well.