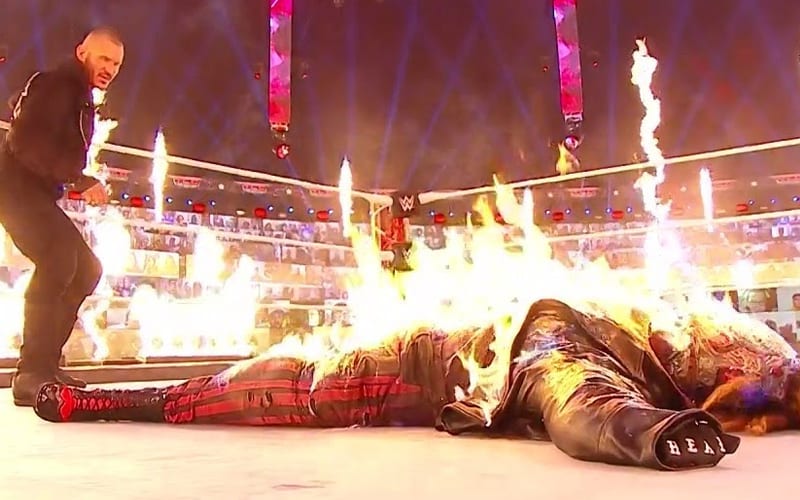 WWE capped off their 2020 TLC pay-per-view with a huge angle. Bray Wyatt’s Fiend and Randy Orton met in a Firefly Inferno match. That ended with The Fiend burning in the middle of the ring. The violent visual has been used by the company a lot already, but did they go too far?

The next week, Alexa Bliss taunted Orton to burn her as well. This ended in a huge cliffhanger which closed out 2020. This week they will pick things up once again.

While speaking to Wrestling Inc, former WWE referee Jimmy Korderas addressed the Firefly Inferno match. He said that they didn’t need need to go that far with Wyatt vs Orton. The way he sees it, lighting an opponent on fire like that was a step too far.

“It’s tough because you talk about crossing a line and you talk about the Attitude Era and all the crazy stuff that went on there, I get toning it down. At the same time, I know you want to ramp things up, but for me, setting someone on fire is maybe just taking it a step too far, I don’t think they needed to go there.”

“You could have alluded to the fact. It’s like what they did with The Undertaker for example where he was put in a coffin before set on fire. You didn’t actually see the person on fire. It’s a little bit different this time. I think that was a little much showing, regardless of whether that was The Fiend lying there or a dummy. The visual was there, and I think it was a little much.”

WWE really did go all out with Wyatt vs Orton. Now they must either walk things back, or let them play out. The situation with Alexa Bliss raises the stakes as well. The company has a lot of options, but it’s anyone guess which direction they will go next.

Keep checking back with Ringside News as we continue monitoring this ongoing storyline.