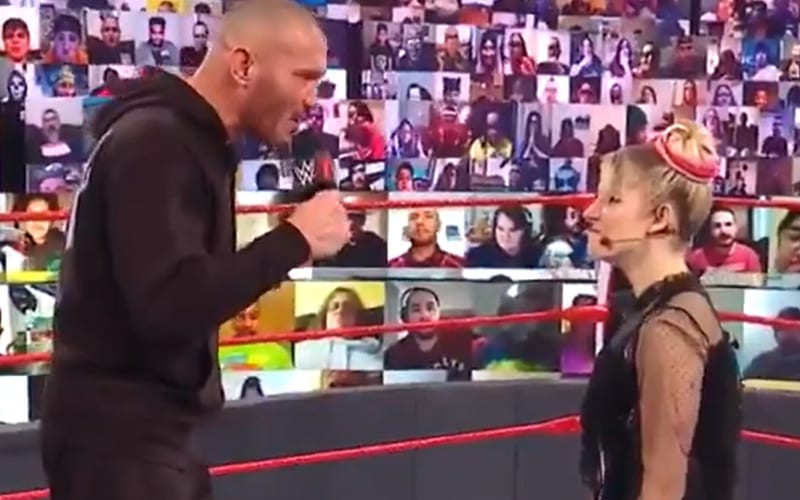 Bray Wyatt was set ablaze at the end of the Firefly Inferno Match. They wrapped up 2020 in a big way with that storyline.

Alexa Bliss had another Alexa’s Playground segment to kick off Raw this week. Bliss said that she can’t wait to show Bray Wyatt’s Fiend her Playground once he comes back. She then said, “maybe he’ll be back at Legends Night.” She then made a reference to him wanting to meet Hulk Hogan because Wyatt takes his vitamins and says his prayers, “although I don’t want to know what he prays to.”

Bliss said that “you light someone on fire one time and it goes straight to their head.” Then they played a Firefly Funhouse episode where Orton was in the Funhouse.

Orton started tearing up the Funhouse. He threw Mercy the Buzzard into Abby The Witch. Then Orton said that if Wyatt does come back he’ll make sure that he has nothing to come back to. Orton picked up Ramblin Rabbit and tore his head off next.

Alexa Bliss challenged Orton to meet her later on in the ring. Orton accepted the challenge.

During the main event segment of Raw, Bliss returned to the ring. Randy Orton came out and asked “where is he?” Bliss said, “this is not about him, this is about me.” Then she left the ring and picked up a wrapped present.

Bliss opened the gift in the ring and she pulled out a gas can and matches. She walked up to Randy Orton and placed them at his feet. Then she challenged Orton to set her on fire.

Alexa Bliss laid down in the center of the ring and waited for Randy Orton to set her on fire. She then got up after Orton didn’t move, and Bliss poured a line of gasoline so all he had to do was light a match.

He wouldn’t set her on fire, so she poured out even more gasoline in a circle. Orton wouldn’t do it. She told him “you don’t have the guts.” She called him “a little bitch” and then poured gasoline all over herself.

Orton said, “you think that I won’t do it.” Then he took his time before saying, “I want to do it, but I know it’s what you want me to do.” Then the lights started to go out as if The Fiend was near.

Randy Orton then lit a match in the dark, and he went to drop it just as the show cut off. WWE Raw ended 2020 with a cliffhanger.