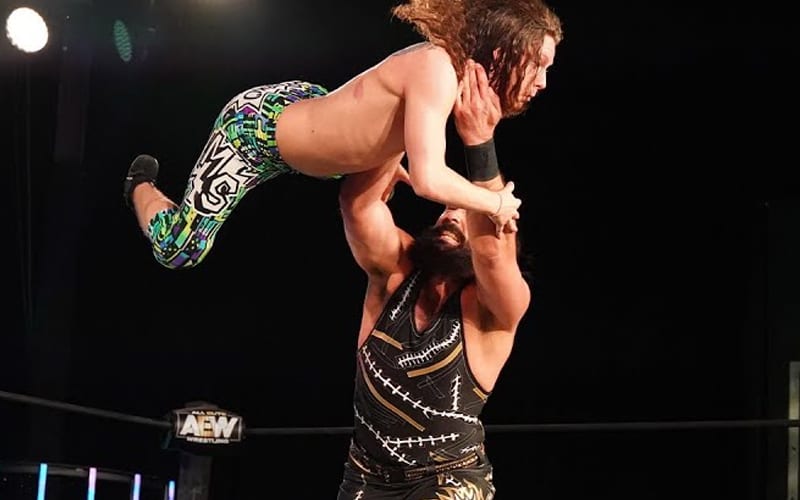 Brodie Lee wrestled 14 matches for AEW, and his fourth contest was against Marko Stunt at the Nightmare Factory in Norcross, Georgia. This took place during one of the company’s massive taping events at QT Marshall’s gym. Marko Stunt will never forget working with Brodie Lee.

While speaking with Talk is Jericho, Marko Stunt revealed that it was Brodie Lee’s idea to wrestle him. This was something that Stunt says he never got a chance to thank him for.

They were able to set up that match by having Stunt in the crowd during one of Brodie Lee’s matches. That setup almost didn’t happen before Marko Stunt was literally on his way out of the building when Tony Khan asked him to do it.

“Tony [Khan] told me we were wrestling and come to find out Brodie had pitched that, to wrestle me. So that was really cool. I never got the chance to thank him for that… He came by, and he gave me a death stare. And I waved at him because why wouldn’t Marko Stunt wave at somebody? And he kind of looked me and up and down, and I got scared. Something set in my heart and I knew something was coming, and they set it up for the next week. And I wrestled Brodie for three and a half minutes. I got my ass handed to me. It was great.”

“When we were wrestling, I had to go drive back six and a half hours because my grandma’s funeral was the next day. We got done with the match, and we hadn’t filmed the crowd bit yet. It was just going to be the match we were going to have. I went to tell Tony goodbye at Gorilla because I had to go, and he was like, ‘Hey man, I hate to ask this, but would you mind setting up that match by sitting out in the crowd for his next match?’ I was like, ‘Yeah, absolutely. That’s great. It builds it up.’ It gives it an actual story instead of it being a one-off.”

“You see me in my jacket, and it looks like I’m all ready to go. I was. I had my keys in my pocket. I’m very happy I was able to do that… Every time we pass each other, he would always say, ‘Hey, you’ll get me back one day. Don’t worry.’ I’m still planning on that. I’ll get him back one day.”

Brodie Lee is gone, but he will never be forgotten. His entry into AEW opened many possibilities, and they got to work implementing The Exalted One into the AEW landscape. Marko Stunt was used to put Brodie Lee over, and he did so in a big way. He will also never forget how great it as to work with him. You can check out the video below.