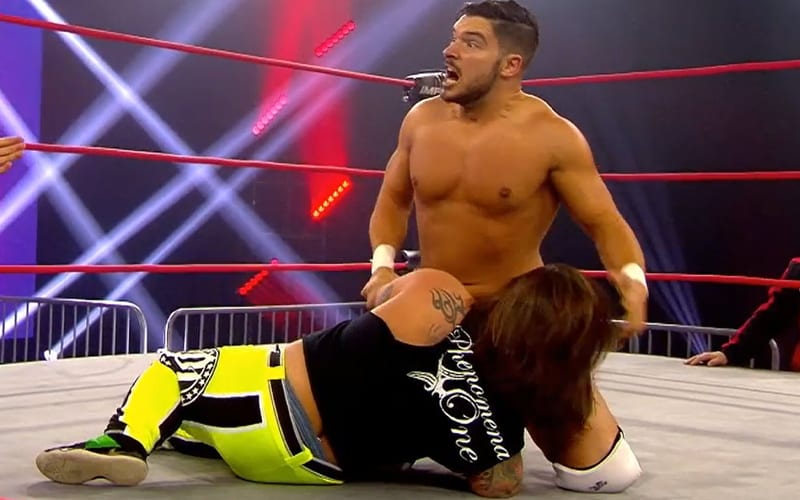 Impact Wrestling featured an AJ Styles parody gimmick this week as Swoggle came out dressed as The Phenomenal One. In the end, the “Weenomenal One” AJ Swoggle defeated Ethan Page.

Brian Myers tweeted out a photo of AJ Swoggle nailing Ethan Page with a strike in the ring. Page’s expression shows the furious power that Swoggle had behind those blistering slaps. “Gonna post this because I assume all of you want it as your phone wallpaper. You’re welcome,” Myers tweeted out as a caption.

I slapped the sh*t outta him! Got the green kid @OfficialEGO over!

Brian Myers then replied to Swoggle by saying: “6 Manias vs 0 Manias.” That was an apparent dig at the fact that Ethan Page has never wrestled at the show of shows, but Swoggle certainly has.

Ethan Page, who lost to Swoggle and dashed the hopes of The North getting another Impact Tag Team Title shot, tweeted back with a simple image. He didn’t seem amused by this entire thread one little bit.

Page’s Impact Wrestling contract is running up at the end of December. As of this writing, we are still waiting to see what his next move is. Josh Alexander’s contract does not run out at the same time as Page’s so this could be an interesting situation.