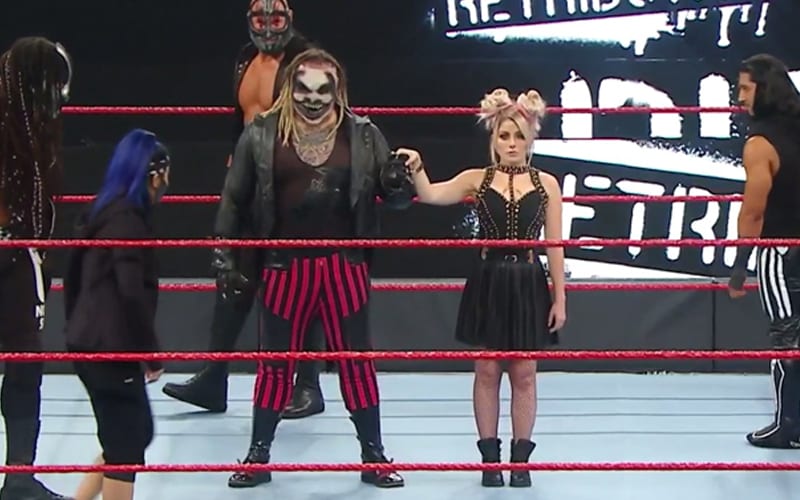 WWE kicked off their season premiere of Raw this week with a brand new intro video. You can click here to check that out. Then they got right to the action at hand.

Alexa Bliss started off the show alone in the ring bathed in a creepy red light. She told everyone to “let him in,” and then The Fiend made his entrance. The ThunderDome changed display, and Retribution came out to new music next.

Slapjack, T-Bar, Mace, Reckoning, and Mustafa Ali got in the ring and surrounded Wyatt and Bliss who remained motionless. Then Ali closed his fist and the lights went out. When they came back on, Bliss and Bray were gone.

The Hurt Business and Retribution had their match next. Then Fiend showed up on the screen again to taunt Retribution before the commercial break.

Bray Wyatt and T-Bar threw some shade at each other on Twitter recently. T-Bar then brought Alexa Bliss into things, and she defended herself. WWE is keeping a lot of options open as they start a new season of Raw.

The Hurt Business won the match against Retribution. Then Fiend showed up and took out every member of Retribution one by one. Mustafa Ali tried to get away from Bray, but Wyatt grabbed him in the ring. Then T-Bar saved Ali, but Bray caught him and hit the Sister Abigail on T-Bar.

After Retribution was destroyed, Alexa Bliss appeared on the screen to look at Wyatt.