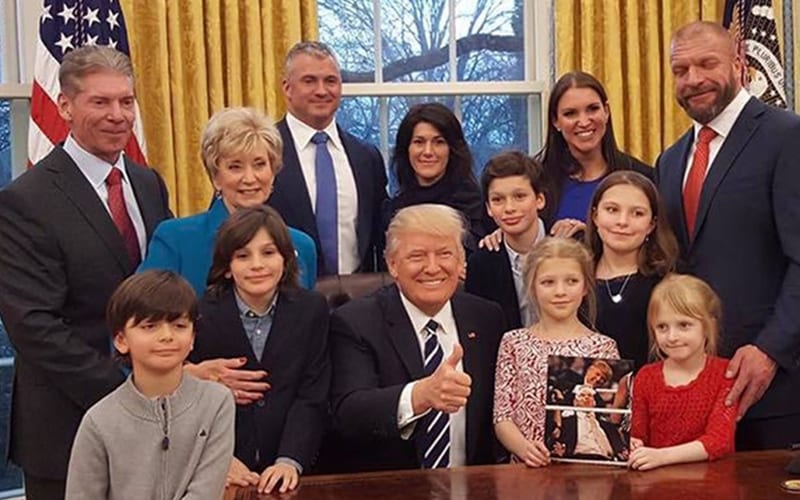 WWE has a Hall Of Famer in the White House. Donald Trump is bidding for re-election in November, and the McMahon Family are big fans. Linda McMahon works closely with the campaign and currently runs a Presidential Super PAC. That’s not to be spoken of within the company.

Linda McMahon’s Super PAC gave Florida $18.5 million just a day before Governor Ron DeSantis announced that WWE (and any other televised event) is an essential business within Florida’s borders.

Stephanie Coueignoux and Jon Alba were able to piece together a very interesting timeline. Money was promised before favors for the McMahons were granted, ironically this also allowed AEW to continue producing Dynamite from Jacksonville.

The Wrestling Observer Newsletter made a special note of Linda McMahon’s political activities. It was also said that employees have to “keep their mouths shut” about McMahon leading that Super PAC as well. This stemmed from a discussion about the Forgotten Sons’ gimmick being tone deaf.

In fairness, even if he didn’t make those tweets, there were those in the company who felt The Forgotten Sons gimmick was probably not the right thing to put on television at the time. And yes, we do know that people were furious at Ryker while having to keep their mouths shut about Linda McMahon heading a Super Pac for Trump’s re-election fund raising

The connections between WWE and the current Presidential administration are hard to miss. This is why a promise was made by Andrew Yang that if Joe Biden wins the election and he is put in a position as labor secretary then WWE’s practice of considering Superstars independent contractors is in jeopardy.