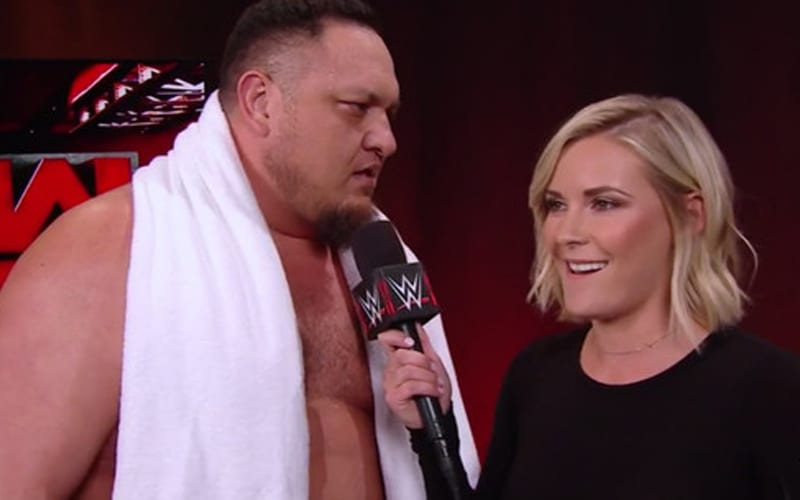 Renee Young is no longer with WWE. She departed and officially changed her name on social media to Renee Paquette once again. She did a lot in WWE under the last name Young, and she also met her husband Jon Moxley.

During WWE The Bump, Renee Young spoke about some of the fun she had in WWE. She said that Moxley would try to say things to get her to pop on camera, but Samoa Joe was also very good at it.

She said that there were times with Joe was feuding with Moxley when she had to remain professional as he berated her husband. Renee Young said that “I always love a heel interview.”

Samoa Joe threw out some pretty good one-liners to get under their skin and strike on a personal level. She also had a ton of fun in the process while keeping her composure.

“There was a time when Joe was doing a program with my husband and he would say things about Jon and that was a time when I would always be like… I’m trying to be professional on camera because that’s my role on camera, but everyone knows that Jon and I are married so I have to get that little undertone and I’m like ‘how dare you say that about my husband.’ It was fun having those moments. I’d say those are some of my favorite moments as far as interviews go.”

Renee Young’s WWE exit very likely came with a non-compete clause. We’ll have to see what’s next for her, but she’s not signing with another pro wrestling company right away.

Odds are good that Renee Young will show up in AEW eventually. There are also some like Booker T who believe she will inevitably find herself in the WWE Hall Of Fame.