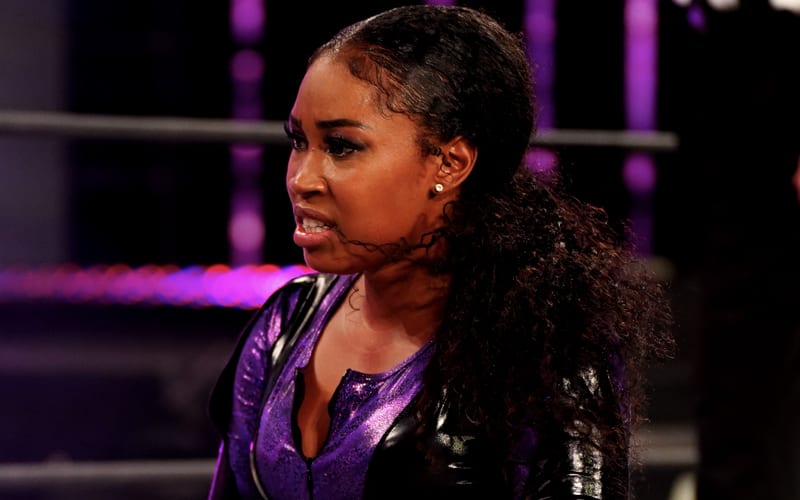 AEW surprised a lot of fans when they brought in Ariane Andrew for their Deadly Draw Women’s Tag Team Cup Tournament. Ariane and Nyla Rose lost their first-round match, but it was certainly a whirlwind experience for the former Funkadactyl.

Ariane was booked for Effy’s Big Gay Brunch during WrestleMania weekend. She said she was training a little for that, but then the event was cancelled. She was very busy and admitted that prior to showing up on Dynamite “I literally had not stepped in the ring probably since January.”

Brandi Rhodes gave her a call out of nowhere. Ariane had very little time to prepare, and she almost declined the invitation. She was able to get everything in line and make it to the Dynamite tapings prior to wrestling in the Women’s Tag Team Cup Tournament.

“Brandi actually reached out to me, and like I said, it was super last minute,” Andrew noted. “At the time, I was visiting my boyfriend in Phoenix, so I was like, OK, I gotta get back to LA. Corona is happening. So I have to get back. I have no gear. My weave is falling off. I haven’t gotten my weave done, and I almost said no because I felt like I wasn’t prepared. And again, out of all the projects I do, wrestling scares me the most because I know I didn’t have much training, and I know how particular fans are. And I just wanted to make sure that I succeed it. So I was like, I just need more time, but in life, when things happen, when are you ever really prepared?”

“So it’s like, you know what, I’m going to go out there and regardless of what happens, regardless of what people think, I’m doing something for me. It’s not for fans. It’s not for [the] management team and what they think. I’m doing it for myself because I really truly do have a passion for the ring, and I missed it. And I was like, you know what, maybe this never happens again, and I never want to look back at life and regret it. No matter what the outcome was going to be.”

Ariane pulled off her appearance for AEW with very little training in the ring to help her prepare. She had nothing but good things to say about her tag tam partner Nyla Rose as well.

We’ll have to see if AEW calls Ariane Andrew for another match. She can obviously make a last-minute flight if needed.