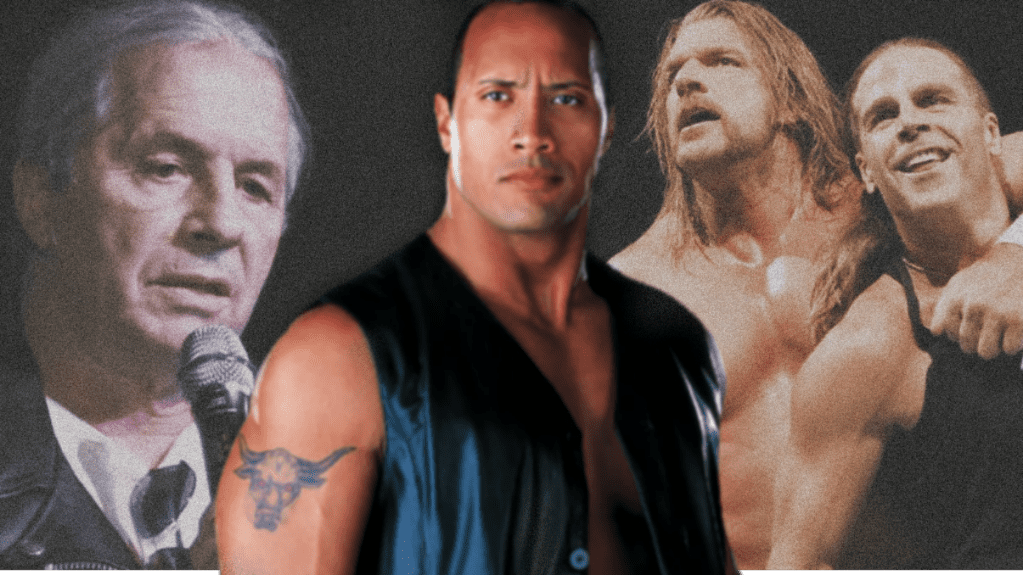 The stories about Shawn Michaels’s politicking have been very prevalent in pro-wrestling. Michaels and his group, The Kliq, were responsible for causing the Montreal Screwjob and The Curtain Call Incident and many wrestlers have credited them for derailing their careers in WWE.

It is no secret that WWE Hall of Famer Bret “The Hitman” Hart never saw eye-to-eye with Shawn Michaels back in the day. In episode 15 of Confessions Of The Hitman, Hart weighed in on how Shawn Michaels & Triple H bullied an up and coming Dwayne “The Rock” Johnson in WWE.

Hart said that many Superstars gave The Rock a hard time in the WWE. He revealed that this pressure was enough to make him want to quit the business and that almost happened too.

However, Bret said that he and his brother Owen went to bat for the Great One multiple times and looked out for him when he first arrived in WWE

A lot of the wrestlers would give him a hard time in those days, a really hard time, enough to try to break him and get him to quit and they almost succeeded. And I can remember going to bat for Dwayne quite a few times and kind of looking out for him, Owen too. I think Owen and I had a lot to do with sort of looking out for him when he first came down. [The Rock] was kind of a marked guy.

Hart said that the people responsible for the “Montreal Screwjob” were the culprits behind the bullying that The Rock suffered. The Screwjob, of course, was caused by the likes of Vince McMahon, Shawn Michaels, Pat Peterson and other top names of the company.

I don’t know why he had such a hard time being accepted by some of the more jerk-like wrestlers. A lot of the same guys who had a problem with Rock were the same guys that were all involved in the Screwjob with me, so I had the same dislike for the same petty bulls–t that these guys were all about.

Hart recalled a story about Shawn Michaels “dressing down” The Rock for having used one of his moves in his matches. Michaels gave him an earful in the locker-room and insulted him despite the fact that The Rock had already apologized.

Hart called it “bullsh*t” and said that nobody owns the move and that Owen Hart used it too but Michaels wouldn’t call him out on that.

I remember Shawn Michaels coming into the dressing room and dressing down poor Dwayne. Shawn came in and just dressed him down and he chewed him out. And I believe, [HBK] told [The Rock] to never do a top rope dropkick ever again because that was his move. That’s what he was mad about. And then, he slammed the door and he walked out. The Rock was [deflated] because in those days, Shawn had a lot of weight. He was a pretty important guy for the company, a veteran guy kind of dressing him down like that, he was apologizing and said he didn’t know, and he thought it would be okay.

I remember the door closed after Shawn left and I said, ‘that’s bulls–t. That’s total bulls–t.’ I said, ‘nobody owns the dropkick off the top. You can do that. Owen does it all the time! Why doesn’t he cut a promo on Owen?’ I said, ‘they’re just busting your chops and they’re trying to work on you.’

Hart went on to say that Triple H would do the same and that those two wanted to see The Rock out of WWE. However, The Rock eventually got his break and became the biggest star in the company regardless of the bullying.

The Hitman said that it was jealousy that made Triple H and Shawn Michaels do these things to The Rock. He said that the two men didn’t want The Rock climbing the ladder and achieving success in the company.

However, Hart was also a top dog in the company at the time and therefore he would go on to reassure The Rock that he wasn’t the one at fault.

Just jealousy and out of nowhere. Just jealousy, and distinctly jealousy. Seeing someone that is a nice kid climbing the ladder bothered someone like Shawn Michaels or bothered Triple H so much that they couldn’t see passed it. They worked on him and worked on him and it was pretty clear to me. And it wasn’t the only time they came in and made those types of scenes. They did that a few times, but I had a lot of clout at that time too, so I could go in and make him rebound and say, ‘don’t pay attention to that stuff, you didn’t do anything wrong’ because he was still green. That’s a term we use in [pro] wrestling. He was still a rookie.

The Rock and Triple H seem to have buried their differences over the course of time. The two men are friends in real life and The Rock even sent special birthday wishes to Triple H this year.

Today, The Rock is the highest-paid actor in Hollywood, and just recently, he bought out Vince McMahon’s XFL for $15 Million. Had he quit wrestling back then due to the persistent bullying from his peers, things would have been very different today. But, he is called The Great One for a reason.