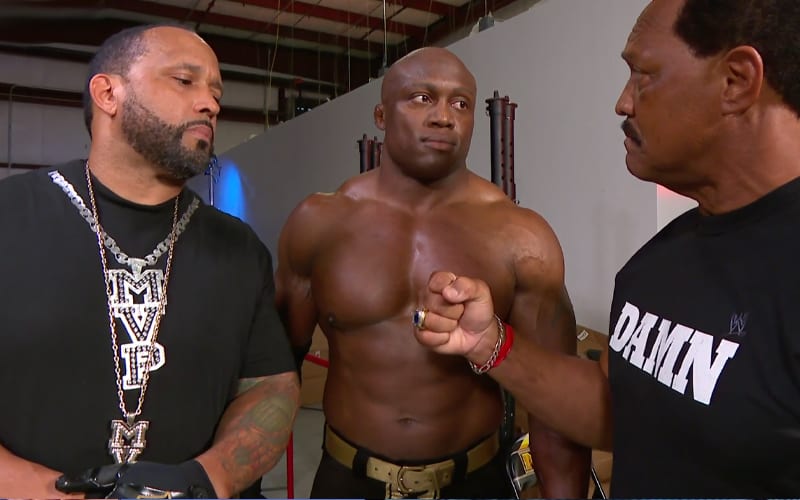 MVP was rumored to be a big part in a revamped Nation Of Domination stable. There was a lot of backstage pull to cancel the idea. WWE obviously went another direction, but they still brought in Mark Henry and Ron Simmons for the segment.

This idea was dropped, but MVP says the chatter isn’t legit. He said “the short answer is no,” because he doesn’t want to do any new version of anything right now. He simply wants to keep rolling with the Hurt Business to make it something great.

MVP recently appeared on Say Less with Kaz and Lowkey where he shut down reports that a new Nation Of Domination was coming.

“No, no, short answer is no, because I’ve been hearing the chatter and I’ve been seeing that and I don’t wanna do the new anything. The Nation was done, it was awesome in the time that it was done. It was needed, stars were made.”

“I don’t wanna rehash something else, I wanna bring something new, and I don’t necessarily, in our approach to The Hurt Business, me and Bobby, as you know are legitimate friends away from wrestling. We boys. Shelton is one of my closest friends. I just like making money with my friends, you know what I’m saying? And I see young, talented guys — I asked to worked with Apollo. I said, ‘Give me him, let me work with him. I know we can get it out of him.’ He’s got it, he’s tremendously talented. He just needs a little coaxing, he just needs a little help, some understanding and me and Apollo, we’ll work on things together, we’ll have conversations before certain segments and he’s coachable.”

“That’s why he’s been successful. Now I’ve always wanted to work with Ricochet. Ricochet has been one of my favorite dudes for years. I used to tell him, ‘If you could talk like you wrestle, you’d be a millionaire.’ I used to tell him that all the time and now, unfortunately I also tell him all the time now, ‘At this stage of my career, I can’t have the kind of match that I’d like to have with you, but we can still have a great match just because of my veteranship and understanding of how things go’ but, I have no interest in rehashing the Nation of Domination and while I do wanna present myself and Bobby and Shelton as strong black role models, successful, we’re businessmen.”

It’s understandable that MVP didn’t want to bring new life to the Nation Of Domination, no matter how great the stable was in its original incarnation. The fact that they were so memorable makes them even harder to follow.

The Hurt Business is going to be something totally new as MVP continues on during his second run with the company. WWE obviously wants to keep him around because they’ve been talking about a longer deal for him.