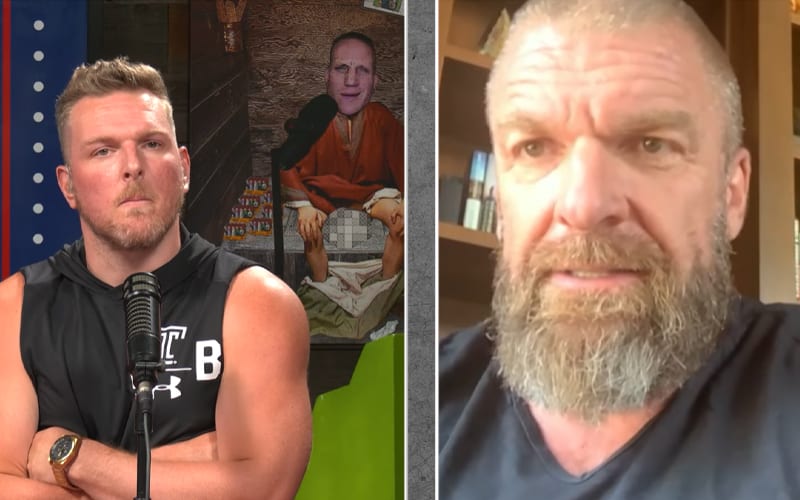 Pat McAfee had Adam Cole on his show as a guest, but his time in the interview seat did not end pleasantly. Cole lashed out at McAfee with a barrage of obscenities after McAfee’s line of questioning rubbed him the wrong way.

Adam Cole released an apology on the matter. This was after Pat McAfee banned him from ever coming back on his show. McAfee read Cole’s apology, but it didn’t seem to set in.

Triple H also appeared on Pat McAfee’s show today. He talked about McAfee and Cole’s history and some of the tension that previously existed between the two. Then he apologized for the former NXT Champion’s behavior.

“I apologize for Adam coming on your show. There’s an interaction between the two of you that I believe is Adam being a little bit overly-sensitive and you, honestly, Pat, being Pat McAfee … you’re a professional button pusher. That’s what you do. You needle people for a living. You do it very well.”

“I don’t know if Florida is on your plans anytime soon, I know you come down there sometimes. So, anytime you’re around, come on the show. I’ll promote your show, I’ll promote you just like we’ve done before. And if you don’t want to do it that way, if you just want to you and him sit in a room with nothing else around it, and no promotion, not the show, anything like that. I’m fine with that too. This is you and him. Man to man. But if you want to do that, separately, and because you’re in Florida or whatever that is, jump on the show. Whatever. Cool with that too.”

Some fans are still under the impression that this whole situation is a work. Bully Ray and Mark Henry 100% believe this is legit. There are definitely signs pointing to this being the real deal, especially after Triple H chimed in.

What do you think about this whole situation? Is it a work? Sound off in the comments below!