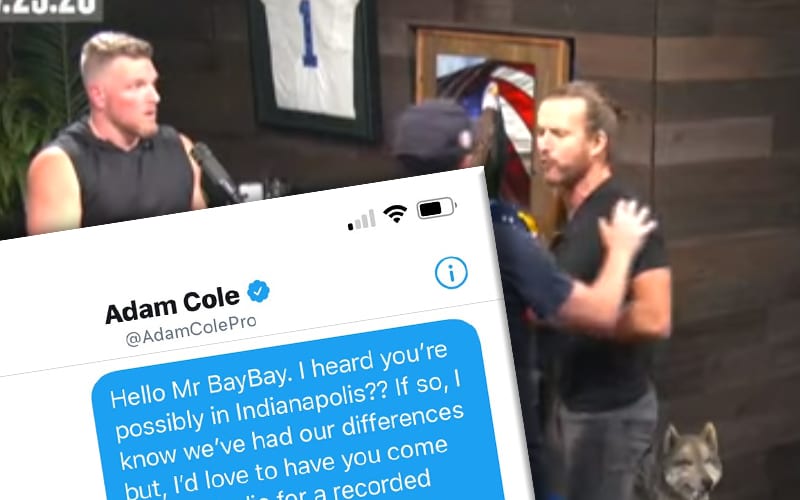 Adam Cole blew up on Pat McAfee during his radio show today and the entire thing was captured on video. The jury is still out on whether this was a work or scripted, but McAfee has some new evidence to show how the appearance allegedly started.

McAfee apparently heard that Adam Cole was in Indianapolis. He DM’ed Mr. Bay Bay and asked if he would want to stop by for a recorded conversation. Things seemed pleasant and they were able to arrange something to make it work out.

Later on, McAfee stated that he regrets sending Cole that text message in the first place as he revealed the text communication he had with Cole. He said that Adam Cole will never be back on his show and cannot believe the incident went down.

Hindsight is always 20/20 but I obviously regret this DM.

He broke a mic, a headset, pushed @tyschmit, & stormed out of our office.

I’ve sat here for 20 minutes now trying to figure out what the hell just happened. I obviously never mean to disrespect anybody but, f*ck that guy. There’s no way that’s how an ADULT human should act. I pride our show on being a positive, good time having, upbeat show & he will never be invited back

Pat McAfee’s response seems to give more evidence that this situation was real. You never really know in pro wrestling, especially since McAfee is also on WWE’s payroll.

We’ll have to see if WWE takes any action against Adam Cole. They will likely have to if this was a real incident.