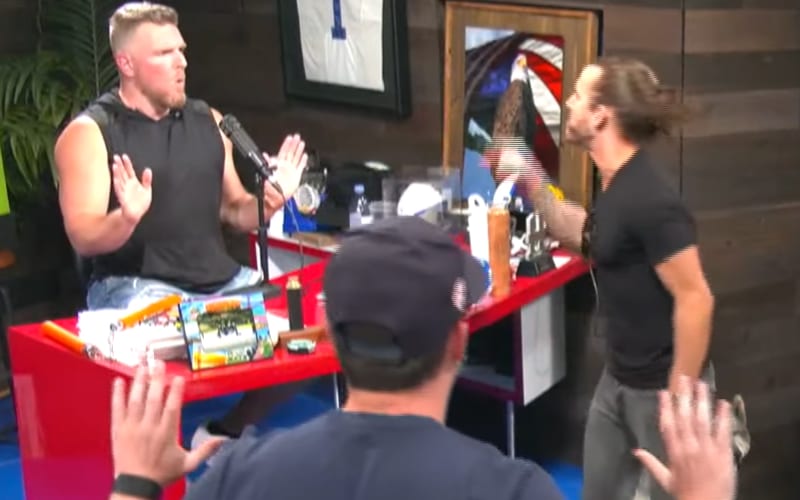 Adam Cole stopped by Pat McAfee’s radio show and things ended in heated fashion. Near the end of the interview, McAfee upset Cole with his line of questioning, and Mr. Bay Bay exploded on the retired NFL punter.

Cole cursed McAfee out and stormed off before leaving the studio and building entirely. This left McAfee to wonder what was going on. McAfee later revealed DMs with Cole and said that he’ll never be back on his show.

“If you called Dusty Rhodes fat he would assassinate your career, you couldn’t work at a bingo hall in Poughkeepsie when he got through browbeating you. Pat McAfee has those kinds of abilities. He’ll do it, sleight of tongue, if you will. He’s slick. You can’t just go on with somebody that can really go verbally and not expect for what happened to happen. Pat started pushing his buttons, then Adam Cole was the heel because he started it, and I love Adam Cole. He was the one that said, ‘of all people to try to poke at somebody. You were a punter.’ He was the one that stabbed first. So he’s the heel.“

“Usually the best things come from reality and I think if it’s not, it will be. It should be. But, I don’t think it is. This is not a work, this is real sh*t that’s going to have to be turned into business because it’s too good not to. Here we are with all the stuff that happened for a week in pro wrestling and we’re talking about a verbal disagreement on a show. It was real and that’s why we talking about it.”

Bully Ray also agreed that this was an instance of Pat McAfee pushing Adam Cole’s buttons. Cole has heard things about his size throughout his entire career. He might even be hearing about them right now as he still waits for a WWE main roster call-up.

Cole and McAfee’s beef might get turned into an angle to play off of this attention. Bully Ray is of the mindset that this was a legit blow-up.

“I think he caught Cole on the right day and pushed enough of the right buttons to get the desired response. If you’re a WWE superstar, as you are, as I was, is that behavior that is acceptable by the WWE? And then the WWE can turn around and go, ‘You know something Pat? We’ve been really good to you, we’ve allowed you to announce on our shows. We have a great relationship with you. Things have always been wonderful. You’re not a part of our world but we have welcomed you into our world. Why did you even feel the need to throw any digs at Adam Cole?’ There’s a lot of different ways to look at this. You know Adam Cole is a big part of the NXT roster. You know that people bust his chops for his size. Why would you do that?”

Pat McAfee appears for WWE and is on their payroll. This also leads a lot of fans to believe that the two might have worked up this situation. Either way, it certainly got people talking in a big way.

Do you think the Adam Cole and Pat McAfee situation is a work? Sound off in the comments below!