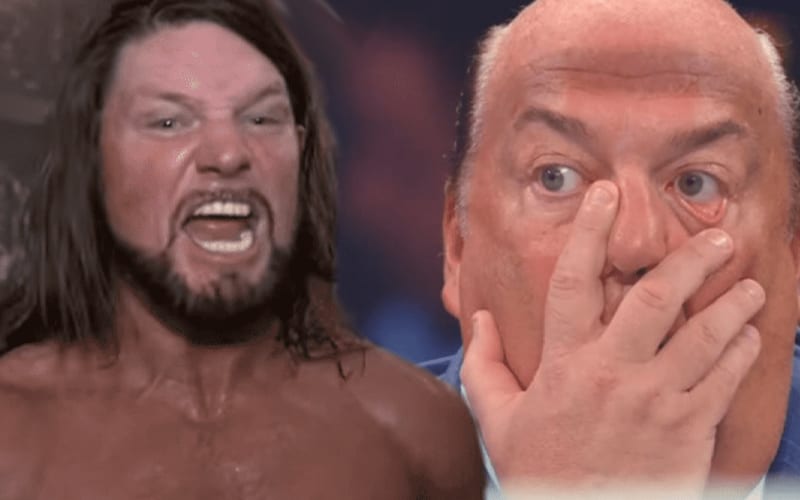 Karl Anderson and Luke Gallows revealed on Talk N’ Shop A-Mania: Countdown To F#cktown that it was Paul Heyman who inspired their WWE firings. They called him a liar and revealed that he was indeed the reason why AJ Styles decided to go to SmackDown.

AJ Styles talked about this issue on a recent live stream on his Twitch channel. Styles said that he headed to SmackDown because he couldn’t stand Paul Heyman and his lies.

The reason why I went to SmackDown is because I couldn’t stand looking at him. I just can’t stand a liar. I’m a grown man, you’re a grown man, why lie? You didn’t even have to say anything. So, I just couldn’t stand to look at him and I was just like ‘if and when the opportunity if SmackDown is available, I can’t be around Paul Heyman. I just can’t stand him. But if there’s ever an opportunity, I don’t mind coming over, that would be great. I don’t want to do anything now because my son if he plays football on Friday nights, I want to be there.’

Styles said that he’s talked to numerous people about this issue and everyone had the same opinion of Heyman and his behavior. The Intercontinental Champion said that Heyman would find ways to put his co-workers under the bus to cover up his mistakes.

Styles said that he presumed that Heyman was universally liked by people but he was wrong. He also realized that Vince McMahon also must have seen how Heyman is perceived by the majority of the people backstage and decided to fire him from his position on RAW.

You wouldn’t believe how many people that I worked with despised this guy because of his lies and he’d find ways to throw them under the bus when he screwed up. He would try to throw them under the bus so they’d get in trouble. I heard this from several, several different people. It was kind of hard to find someone who liked him. And I didn’t know this, I just assumed everybody liked him and I was the only one.

Vince is a very smart man and he can see through a lot of crap and I think he finally saw what everybody already knew and said ‘you know what man, you’ve done some great things in the past [but] you’re just not well-liked here, maybe hit the bricks. We’ll let you be the advocate for Brock Lesnar. You do it well, you can’t deny that. He’s good at that. I think that’s as far as it needs to go.’ The only person you can blame for this is himself. Just don’t lie to people man. This is the business that he, I don’t want to say grew up in but found a way to be successful in – probably by lying. I’m not the first guy to say this, as I found out.

This is an interesting opinion of Paul Heyman as so many are currently missing him backstage. His motive was to push younger talent, but Vince McMahon fired him to choose a different direction of pushing established names instead.

A fan managed to acquire footage of Styles talking about Heyman on his Twitch stream. You can check out the video here: