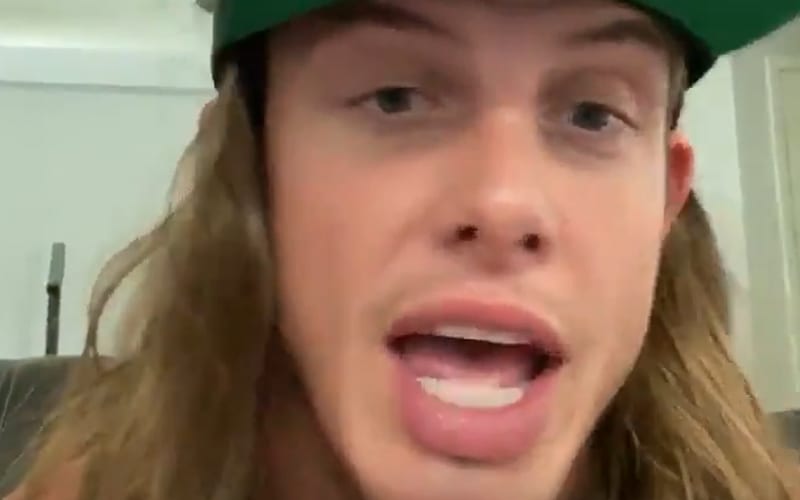 Matt Riddle’s name was mentioned in the #SpeakingOut movement as he was called out by Candy Cartwright. Riddle remained mostly silent through this situation as he released a statement through his attorney. Following a couple piece of photographic evidence from Cartwright, Riddle had to say something.

Riddle dropped a video statement on Wednesday morning where he directly addressed the allegations against him. He named Candy Cartwright and mentioned the accusation that he sexually assaulted her. He denies all of those stories, but he does admit to having a relationship with Cartwright.

Matt Riddle discussed the depression he felt when having an affair on his wife. He didn’t want to speak about it publicly because it is embarrassing. Now the world knows he had an affair, but Matt Riddle is adamant that he didn’t sexually assault anybody. He is also sticking to his story that Candy Cartwright became a stalker.

“That story about the van trip and the driver being asleep and me forcing you to do stuff and hop on, whatever it’s a complete lie — a fabricated story because you’re still mad. You know why you’re still mad? Because yes — we had an affair. You’ve got plenty of evidence of that. You know what? I never denied it because it happened. Do I want to talk about it? Do I want to share it? No, it’s embarrassing because I feel like a real piece of crap for cheating on my wife.”

Riddle said “we had a relationship, we had a fling.” He started to get depressed because he was hiding this from his wife, and he was lying to his friends as well. Matt Riddle said he blocked Cartwright on social media, but she kept messaging him. Then he got a new phone number, but she found it.

Riddle then said that Cartwright showed up at his hotels. She asked his friends where he was. He then said: “At this point you have to realize if you don’t think you’re stalking me or harassing me you’re crazy.” Riddle also said anyone watching at home who thinks the same thing is crazy too.

You can watch the entire public statement below.