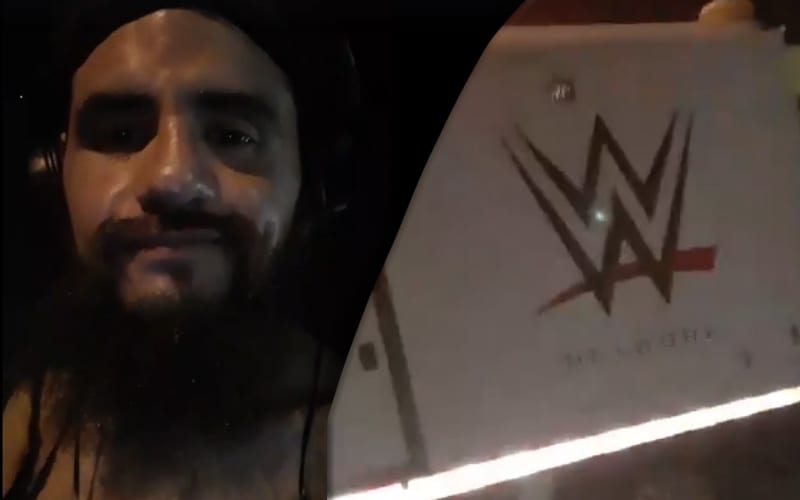 Armando Alejandro Montalvo isn’t supposed to be on WWE property, but he keeps testing their boundaries.

Montalvo was picked up by police on April 13th for walking across the street from WWE property while carrying a cross and yelling. He streamed the entire incident for Facebook Live.

When his hearing came, Montalvo arrived at the court house in a red clown nose and a full suit despite being told he didn’t need to show up. His court hearing was via teleconference. Then he annoyed the judge by calling her “baby girl.”

WWE tried to extend the order to prohibit Montalvo from being 1,000 feet from where they are trying to conduct business. This didn’t fly for him and no new court date was set. The order of protection still applies, but Armando Alejandro Montalvo decided to forget all about it later that night.

Montalvo went back to WWE property at 3 AM on the same night of his court date. He also streamed the entire event on Facebook Live.

Armando Alejandro Montalvo took off his shirt and proceeded to walk around the property in a video that lasted an hour and eleven minutes.

He ran into one man who happened to be around. They had a conversation about pro wrestling and MMA. Montalvo talked about getting shot by the police and said that he walks the streets to make sure cops don’t shoot more people. He then acted like a pro wrestler who had tips for this man. He also accused this man of working for WWE before the guy eventually left.

Another man pulled up in an SUV who Montalvo called “Donnie.” It seemed like they knew each other, but “Donnie” wasn’t affiliated with WWE. He did tell Montalvo that nobody is in the building before driving off.

It was after 4 am by the end of the video. Montalvo wandered around the property for a little while longer while talking trash about Triple H. The video concluded and no police arrived, but there were a couple of occasions when Montalvo said that the cops were on their way.

You can watch the entire video below.