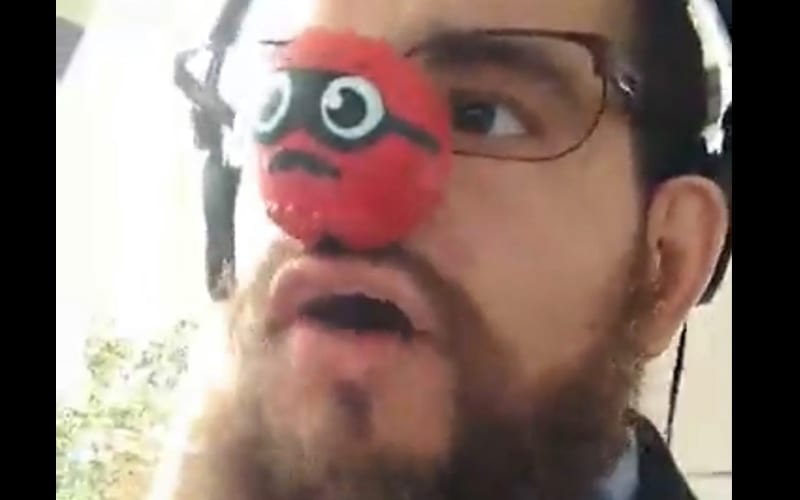 Armando Alejandro Montalvo was sent a violation of a protection order from WWE after he was spotted on their property. He filmed his entire cross-carrying experience outside of the WWE Performance Center as well.

When he showed up to court this morning, Montalvo spouted phrases like: “it’s a crime for being so fly in the city of Orlando.” He also did not regard the court house’s policies regarding COVID-19 protection either.

“Heroes don’t wear masks,” he told a police officer when asked to put on a mask that he was given.

“I just want people to know who I am,” Montalvo replied. “Trust me,” the cop said, “we all know who you are.”

Later on, after he processed some paperwork, Montalvo said to the police officer:

“If you guys lock me up I’d like to take a dump in my own toilet. There’s no place like home. The first time I went to county jail I held my pee for 13 hours. I’m no longer potty shy — now i’m on tour!”

They asked him to wear a mask, so he put a red clown nose on. When asked “where’s your mask?” he pointed to his red clown nose and said “this is my mask.” He was told that a clown nose doesn’t count as a mask to which he replied: “that’s all heroes need.”

He also randomly spouted: “We’ve gotta break bread in peace! We gotta stop all this hatred in America!” His police escort totally agreed with that statement.

Montalvo was almost denied access into the courtroom because he didn’t take COVID-19 questions seriously. He stated that “I am immune from everything going on in the world.” They told him to put his mask on and he put his clown nose back on instead. This caused them to reprimand him yet again.

This was a very interesting experience in court, to say the least. You can watch it below.