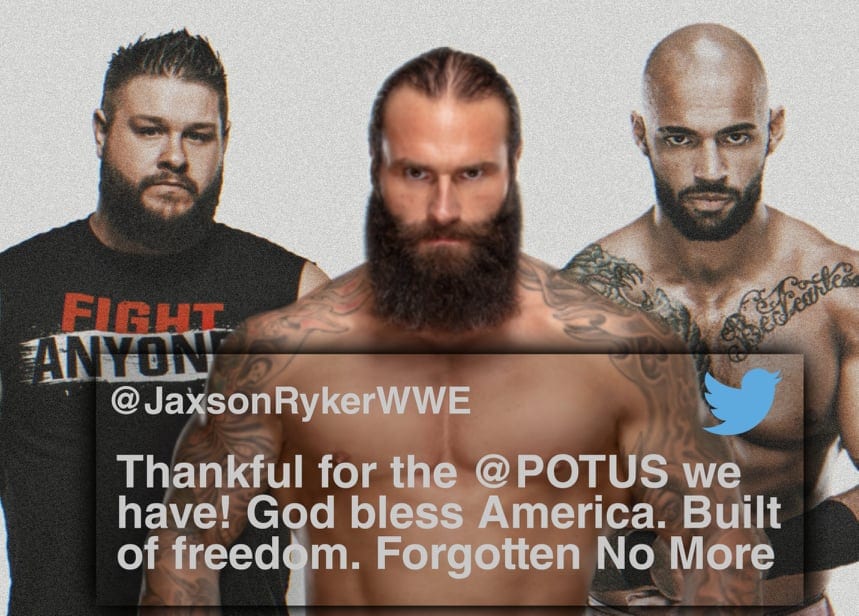 Jaxson Ryker of the Forgotten Sons took to his Twitter handle and expressed his support for the President of the United States – Donald Trump. WWE Hall of Famer Dave Batista saw the tweet, and called Ryker a “sorry motherf*cker”.

Soon, more of his peers saw the tweet and their reactions weren’t too different than Batista’s.

Kevin Owens said that although he acknowledged Ryker’s freedom of expressing his opinions, the fact that Ryker used his wrestling catchphrase to do so (given the context) was “f*cking pathetic”.

Ricochet said that he understood that Ryker is a “bad guy on TV” and hoped that this was all there was to his statements. However, he said that if these were Ryker’s actual thoughts then he’d be saddened.

Ryker’s Forgotten Sons team-mate Steve Cutler went on his Twitter to separate himself from his tag-team partner’s statements. Cutler said that he might be in a tag-team but he is his own person and that he fought for the freedom ALL the people of the country, regardless of how they look.

Cutler used #JusticeforGeorgeFloyd and said that everyone deserves to be treated equally regardless of their race.

Mustafa Ali called Ryker out for supporting a person who refuses to acknowledge the pain of the African American population at a time like this.

AEW’s Joey Janela reacted to Ryker’s tweet by saying that someone might take a dump in his gear bag after this.

Ryker and The Forgotten Sons have been making a name for themselves after getting called up to SmackDown recently. However, given the time and context of Ryker’s tweet, it could spell trouble for the group’s future in the company.