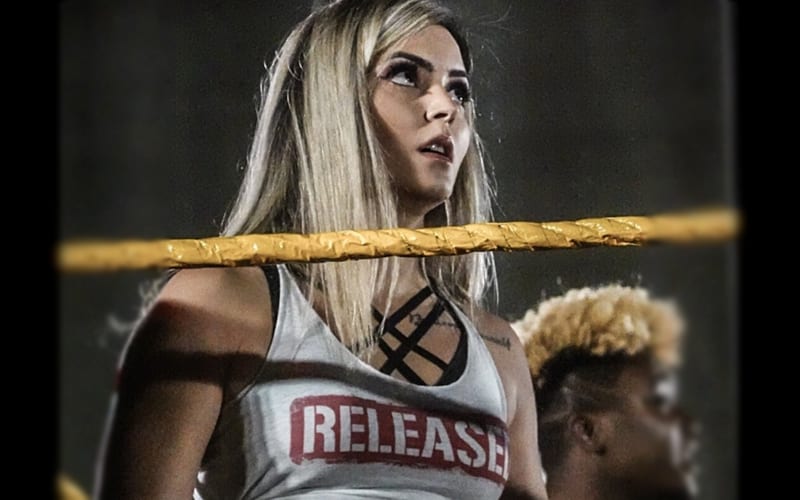 WWE released many Superstars and other staff on April 15th. Taynara Conti captured a few headlines prior to her release because it was reported she was unhappy with pay. She then re-appeared at an NXT house show wearing a t-shirt that said “Released.” This was an interesting way to go, but she had her reasons.

While speaking to Ring The Belle, Taynara Conti explained why she sported a “Released” t-shirt during her return to NXT. She received permission to wear the shirt as well.

I was thinking ‘Well, if people were saying that, why not? You know, let’s try to use and make a storyline. I want to change, they keep saying no. And I said, ‘Not this time, I’m not going to ask.’ So I didn’t ask. I made my T-shirt, although I didn’t put that on TV, you know. I’m professional enough to know that I can’t do that kind of stuff on TV. But like live events, they’re made to try new stuff. New moves, new characters. So I didn’t ask. I just showed up with a T-shirt. Before I did my entrance, I told my producer ‘Hey, I’m using this T-shirt, is this a problem?’ I was ready to go, and said ‘Hey, is that a problem if I used this T-shirt? I had my own T-shirt in case they say no.’ But they were like ‘Uh, I don’t know.’ And I said ‘If someone gets mad, you can say that it was my choice. It’s just something that I want to try.’ And the producer said, ‘Okay, it’s on you.’ I’m like, ‘Yeah, it is. On me.’”

The real meaning of the t-shirt wasn’t to proclaim a separation from WWE, but rather from her former self. She was released from her previous NXT character in WWE and claims that she had a more aggressive nature in the squared circle.

“So the idea for the ‘Released.’ It was not just to you know, try to piss people off or whatever. So I put everything on paper, and I showed them my idea. Of course at first it was like, ‘Oh my god, she’s coming with a T-Shirt saying ‘Released.’ But then I had a backstory. I was like, ‘Well, I’m trying to say that I’m released from who I was before. And then I will be able to show my new character.’ So if you watch the match, you can see I’m completely different in the ring when I use my T-Shirt. I was more serious and not making fun, and not being sexy. I was trying to do something else. It was not just to say ‘Ha, released!’ I had a backstory. I was planning, I was rewriting, putting everything on paper. I had everything planned, you know.”

Taynara Conti had a 30-day non-compete clause when WWE NXT released her on April 15th. She didn’t see her release coming despite her “Released” t-shirt. We’ll have to see what the indies have in store for her.

What do you expect from Taynara Conti after WWE NXT? Sound off in the comments below!