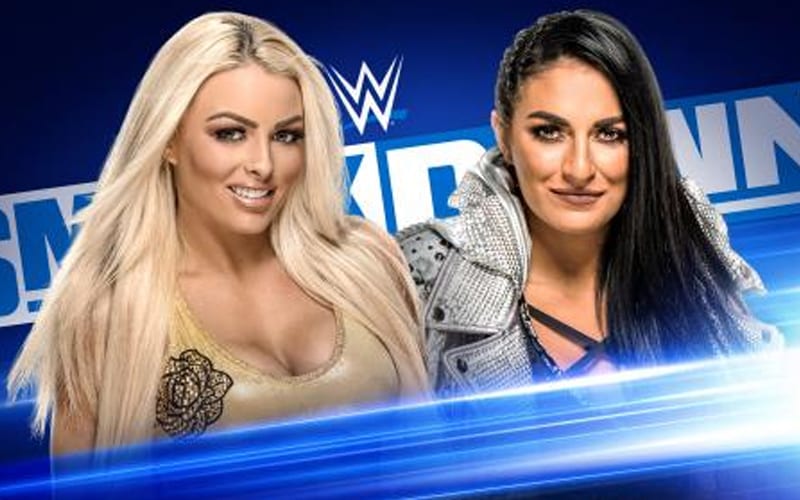 Money In The Bank is this Sunday. Tonight’s episode of SmackDown was filmed last week. Let’s see what they have in store.

Mandy Rose and Sonya Deville will have a singles match. Let’s see what happens to continue that feud because they will be far from finished after tonight.

Bray Wyatt and Braun Strowman will have some sort of segment this week. The two will battle at Money In The Bank in a match that is simply too close even for betting odds to call.

Jeff Hardy is returning this week. He promised to keep an eye out for Sheamus.

Tamina Snuka will team up with Lacey Evans to take on Bayley and Sasha Banks. Daniel Bryan and Drew Gulak will also introduce a mystery partner to take on King Corbin, Shinsuke Nakamura, and Cesaro.

Mandy Rose was backstage. Otis asked her if she’s ready for her mach against Sonya. He wanted to know how he can help. She told him to focus on MITB. Then she kissed his cheek.

They showed Sonya Deville who was gearing up. Dolph Ziggler walked up to her and she said she’s been waiting 5 years for this match.

Rose hit a running knee as Deville was putting her hair up to square up. Rose beat Deville down in the corner as she tore at her.

Deville landed a kick. Mandy ducked a clothesline and then Rose returned fire. Deville then rolled out of the ring to get a breather. Deville hit a kick on the way in and took over with a running knee and a two count.

“You think you’re better than me?” Deville asked as she continued to hold Mandy down. She said “you’re embarrassing yourself right now.” Deville said that she feels bad for Rose, but she’s enjoying giving her pain. She tore Rose’s eyelashes off and continued to humiliate her.

Rose got free, but Deville kicked her down again. Deville said that Rose is in her world and if she doesn’t stop embarrassing her then she’ll have to hurt her.

Rose came back with two clotheslines and hit a running knee that sent Deville to the floor. Then Rose screamed “who’s the bitch now, bitch?!” She drove Sonya’s head into the announce table and threw her into the steel steps.

Then Mandy Rose threw Sonya over the announce table. Mandy tried for a Pedigree, but Deville got out of it. Rose went for a running knee. Then Sonya Deville won with a roll-up pin.

Big E’s “ahhhhhhh people at home!!! Don’t you dare be sour,” bit isn’t fun anymore. They need someone in that crowd already. Big E and Kofi Kingston came out and they were dancing in front of nobody.

Kofi and Miz fought into the corner and then Kingston started unloading fists on all the heels. This started a beatdown and the babyfaces saved him. The heels went outside and then the Lucha House Party hit dives on the heels before they cut to commercial.

When they came back from commercial, The New Day took control. Big E tagged Kofi Kingston and delivered a dropkick to Wesley Blake. Big E took a tag and hit a splash. Then Lucha House Party had quick tags and splashes.

Kofi took the tag again and continued to work on Blake.The Miz got a tag when Kofi missed a splash in the corner. Big E tried to get in, but Jessika Carr ran him off while The Miz worked on Kofi and then he tagged Morrison.

Morrison hit a move I’ve never seen before it was like an Alabama slam that turned into a flipping slam then he hit a running knee before tagging in Cutler.

Ryker hit a cheap shot on Kofi (Ryker isn’t in the match) and Blake got the tag again. Kofi fought off the Forgotten Sons and then Blake nailed a suicide dive on Kofi when he went outside.

When we came back from commercial, Kofi was fighting off Miz and Morrison. Big E helped out, but he took the stairs outside. Kofi hit the SOS, but Miz kicked out and then they made tags. Metalik took the tag and he started making quick work. Dorado came in and hit a double springboard stunner on the Forgotten Sons. Metalik hit a sunset flip pin for a two count when he got tagged in. Then Dorado took the tag and hit a spiking rana before he hit a splash, but the Sons broke up the pin.

Kofi and Blake went over the top rope. Big E caught Cutler and he launched him into Kofi’s boot. Blake held Big E on the floor and Cutler stomped him before Kofi got powerbombed onto Big E.

Dorado hit a sunset flip and almost got a pin. Morrison fought back and got a two count. Then Morrison went for Starship Pain, but he landed on his feet when Lince moved.

Lince hit a Poisonrana as Miz took the tag. Miz hit a Skull Crushing Finale on Lince Dorado and he got the pin.

King Corbin cut a heel promo backstage. Kayla Braxton was back instead of Renee Young.

Renee Young was in the ring. Looks like they needed both Kayla and Renee this week. It’s not like there’s a pandemic going on, whatever, make Renee Young fly across the country.

Hardy came out and she asked him what he has left to prove. He said “I’m not sure” and then he talked about his career, and his lows. Then they showed Sheamus asking “who cares Jeff” on a TV backstage practicing safe social distancing.

Jeff said he can still hear the fans chanting his name. Then he asked fans to stick with him through this return. Sheamus was shown again asking “this is what people have been waiting for?” Jeff said he’s surprised that Sheamus hasn’t interrupted him yet. He can feel his energy, his intensity. Come on. So Sheamus came out.

Sheamus said that everybody knows Hardy’s next failure is right around the corner. Everybody, but him. He said that Jeff’s flame has “been barely burning for far too long… it’s time for me to put it out.”

Sheamus went to the ring and Jeff kicked him and scaled the roped to hit a Whisper In The Wind and a Twist Of Fate. Michael Cole said Twist Of Fate. Hardy hit a swanton bomb and posed for zero fans.