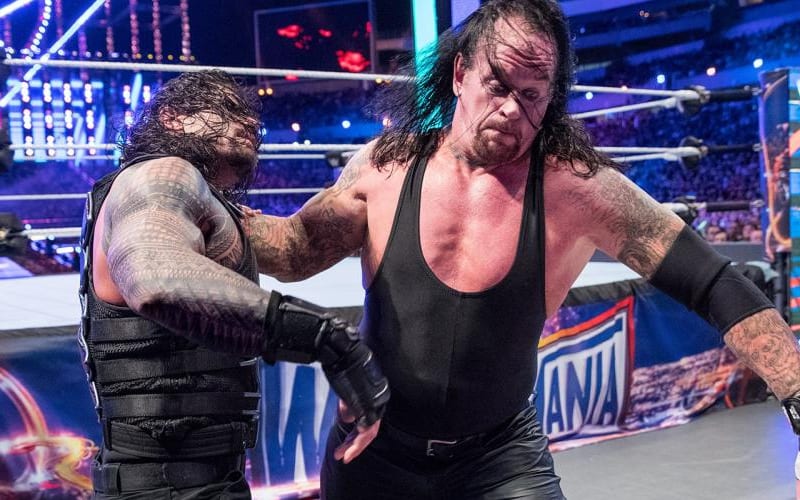 The Undertaker: Last Ride documentary series is set to start after WWE Money In The Bank this Sunday. There is a lot to the Deadman’s story and he’s getting out there more so he can tell it.

While speaking to ESPN, The Undertaker brought up his WrestleMania 33 encounter against Roman Reigns. The Phenom stated that he was “disgusted” to see that match when the time came to watch his performance.

“That was one of those times it was tough having the cameras there. That was the first time that I watched that match back. I was so disgusted with it that I didn’t want to watch it back.”

The Undertaker focused on the things he could have done differently in his match. A lot of fans thought that contest might be his last. Following his loss, Taker left his hat, coat, and gloves in the middle of the ring. This was a huge gesture that was seen as sacred.

He continued to reflect on his WrestleMania battle with the Big Dog. He realized that even after Brock Lesnar broke the streak that his name still had clout and that is needed to push younger Superstars. In the end, he did the best he could for Roman Reigns, but he was still disappointed for him.

“As I got older … I know when I’m out there and I’m moving slow. I know when my limp is more prominent that it may be. Or when I’m behind in a spot. I just know now. “[Watching that match], I’m battling with it. I was so disappointed for Roman.”

“Even after Brock Lesnar beat the streak, for guys coming up to have a match against The Undertaker at WrestleMania — especially where Roman was at — it was important for his career. Especially because he was going over. For me, in that role, I wanted to do the very best that I could do for Roman. I think the world of him. You want to be able to do the best you can for him, and you know you have no business being in the ring.”

The Undertaker’s return to WWE could bring back the same persona that we last saw ride off into the night after the WrestleMania Boneyard Match. Until that day comes we’ll have to see how WWE sets the stage for The Undertaker’s next chapter.

Should The Undertaker retire? Sound off in the comments below!