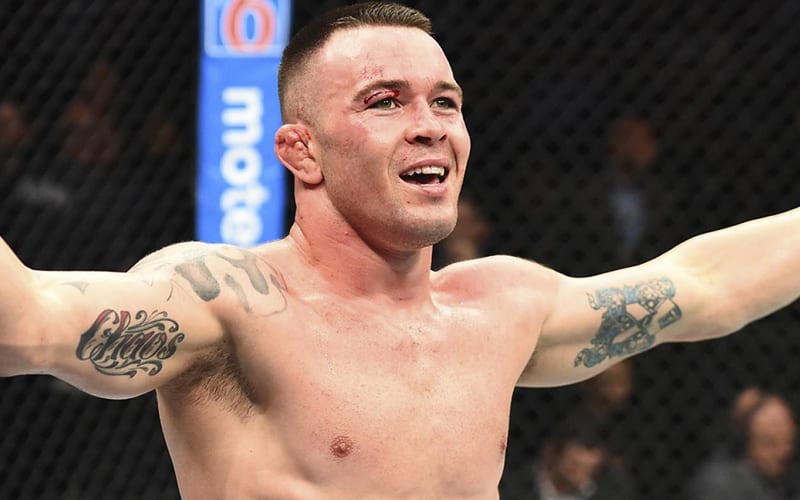 WWE has invited plenty of cross-over athletes to join the company throughout the years. It looks like they might be close to getting another former UFC fighter.

While speaking to the What The Heck Show via a webcam interview, Colby Covington explained that he has a lot of interest in WWE. He loves and respects Vince McMahon and what he’s been able to do.

Covington also confirmed that he’s “looking to go over to WWE and make wrestling real again.” Let’s see if he’s able to do it.

“Those guys are true sports athlete entertainers. To put on a show like that for the world while everybody’s at home watching, you don’t have the same energy from the crowd and the same adrenaline that you get when you walk into a full arena, so to see those guys out there putting it all on the line, I respect those guys. Those guys are some of the hardest workers on earth. I hope to join them someday. I’ve got a lot of love and respect for Vince McMahon and what he’s done for the business model of the WWE. My thing is I want to go to WWE and make wrestling real again. I want people to get behind it and think that it’s real. You ain’t going off the top rope on me because I’ll take you out with a double leg, you ain’t gonna get up there. So I’m looking to go over to WWE and make wrestling real again in the near future. Until then I’m gonna be retiring all the old fogeys over here in the UFC.”

Colby Covington said that he’s kept up with guys like Kurt Angle and Bobby Lashley. He is friendly with some people who have big WWE connections so we just might see him make the jump eventually.

“I’ve been talking to Bobby Lashley, my friend, he’s a teammate, and Kurt Angle obviously, I walk out to his music for my fights, I keep in good touch with those guys. And Ronda Rousey, the greatest women’s mixed martial artist of all time. It’s good to learn from her and see her and how she’s handling the transition from MMA to pro wrestling. I think I’m gonna have a good grasp of it. I grew up amateur wrestling and I know how to act, I know how to sell, and everybody knows I know how to entertain so I think it’s gonna be a smooth transition when I go to the WWE in 2021.”

It sounds like Colby Covington has some real ambitions to jump over to WWE. There might be some substantial paydays in it for him if they can work out a deal. Let’s just see what the future holds for the 32 year old.

Do you want to see Colby Covington in WWE? How do you think he’d do in the squared circle? Sound off in the comments below!