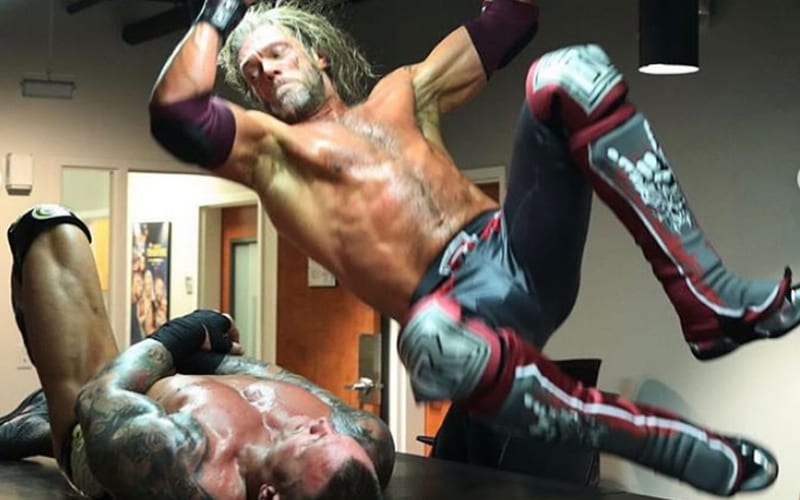 Edge and Randy Orton put each other through a lot as they tore each other apart across the WWE Performance Center. The Rated R Superstar won the last man standing match, but it took a lot out of him.

The two also apparently upset some people in WWE for doing a spot that was way too close to how Chris Benoit killed himself.

After their 36 minute long WrestleMania battle, Edge reflected on his match against The Viper. Edge informed everyone that he’s out of quarantine and “back to being a dad.” He is very proud of what he was able to do with Orton and thanked everyone for their outpouring of support.

So this was my Sunday. Actually it was filmed two weeks ago. So I’m officially out of self quarantine and back to being dad. After being Edge for WrestleMania 36.

For the first time in a singles match in 9 years. Against, in my opinion, the most naturally talented person in the industry in @randyorton I will always be proud of what we accomplished with some strange circumstances. I have a feeling we haven’t seen the last of each other. And for that I’m strangely thankful. He pulled me to a 40 minute fight after being retired for 9 years.

Wasn’t sure I had that in me. Now I know. He pushed me. For all of you, hopefully you watched WrestleMania and were able to get lost in it and try to forget about our current reality, even if only for a few hours. I’d also like to thank EVERYONE for the outpouring of positivity for the @wwe 24 documentary, The Second Mountain. Also, thank you to the ENTIRE team it took to support me and make all of this happen. I’ll get to you all on separate posts😉 It’s humbling. Lastly, stay safe everyone.

Edge will be back on WWE television. He inked a deal for seven more matches over the next three years. His WWE appearances won’t happen often, but Edge will return once the time nears for him to pick his next destination in WWE. For now, it seems like he’s going back home to Ruby, Lyric, and Beth Phoenix.