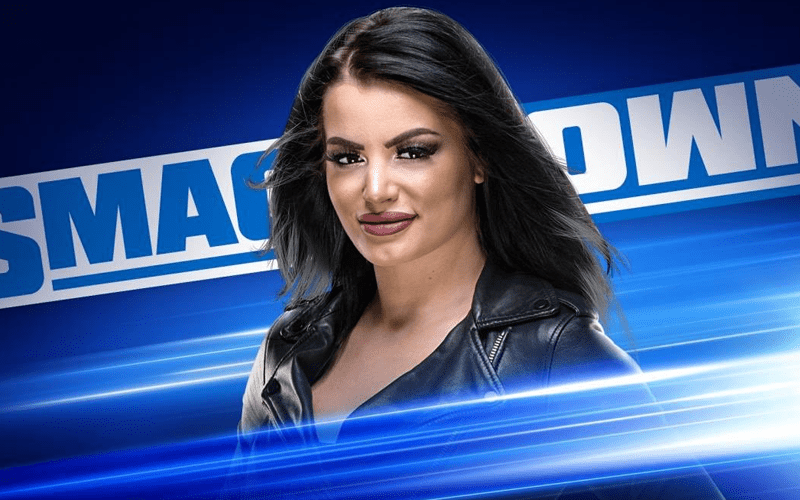 It’s Friday the 13th and what a perfect time to head to the WWE Performance Center due to a pandemic.

We have no matches announced for tonight’s show. WWE is figuring out a lot of things right now. It’s likely to be a very newsworthy time, and we thank you for reading all about it on Ringside News.

John Cena will be on tonight’s show. He promised to bring the entertainment.

Jeff Hardy will also be back tonight. He might have time to jump on the road to WrestleMania.

Triple H welcomed us to Friday Night SmackDown with no audience. This is going to be interesting.

Bayley and Banks came down. Bayley hyped a crowd that wasn’t there. Michael Cole said they are dealing with a limited staff. Triple H was on commentary alongside him.

Bayley cut a promo about how they are the face of SmackDown. Banks said it doesn’t matter how many fans there are in the building because this is their house. It’s appropriate that they’re in the PC.

Triple H was playing a heel on commentary.

Bliss said something about the Kabuki Warriors hiding out on RAW. Nikki Cross said it makes her feel salty. This was all very strange. It’s like they’re airing the rehearsal.

They started a match right there.

Bliss and Cross took control early on and they went to commercial.

Banks applied the pressure to Banks and landed knees to the corner. She kept Bliss away from Cross as they talked-up everyone in the ring’s time in NXT.

Bayley took the tag and continued to work on Bliss. Banks nailed a kick when the ref wasn’t looking. They continued to tag in and out as they worked on Bliss. Cross started to get the crowd going with “Lexi” chants, then she realized that wouldn’t work.

Nikki tried to rally Bliss, but Bayley kept her down. Banks tagged back in and then Bliss fought out of the corner. Banks missed a double knees and Cross got the tag.

Nikki Cross hit a flurry of moves on Banks and a bulldog. Then Sasha tried to come back, and they traded a few roll-up and backslide pins.

Suddenly, Asuka showed up and took out Bliss outside. Banks got in the Bank Statement and Cross tapped out.

They played a clip of Goldberg after the Super ShowDown when Roman Reigns came down and said he’s next.

This has got to be the first time Roman Reigns has never been booed. Thanks to Amos Cheek for dropping that gold in the comments section.

Roman talked up his Mania match. He discussed the critics and said he’s dealt with them his whole career. They were sitting down in two director’s chairs.

Roman said he’s taking what’s his and he’s doing what he needs to do to get what he’s going to get. Then Roman was asked about Goldberg’s spear.

Goldberg said that he’ll bulldoze Roman. Then Roman said Goldberg went to Georgia so he’s not smart enough to operate a bulldozer. Roman said Goldberg is a part-timer and Roman is a full-timer. He’s been groomed and “eaten from the WWE table” his entire life.

Roman said he’s busted his ass every week and he’s taking his Universal Championship back at WrestleMania.

Sami Zayn, Nakamura, and Cesaro were trying to talk to Kayla Braxton. She told them that they’ve been bumped. That’s okay by them because they have celebrating to do.

Then Jeff Hardy showed up as her actual guest. He said it feels good to be back. He had zero pop from the live crowd. Shame. Then King Corbin showed up and said not everybody’s happy that he’s back.

Corbin said that SmackDown has changed. He asked Jeff if he plans on walking a straight line, saying his ABC’s backwards, or touching the tip of his finger to his nose. Then Hardy said he’s got a match against Corbin.

Elias showed up and wanted to sing a song. Corbin didn’t have time. He left as Elias started to strum. Bummer.

Side note: They haven’t said “coronavirus” once.

Triple H came back and said he’s going to save the show. He also took a shot at Dave Meltzer’s report about him being “demoted.”

Daniel Bryan and Drew Gulak were backstage. Bryan put Gulak over big time. He asked him if he’s willing to teach him because he had a reversal for everything he did at Elimination Chamber.

Then Sami showed up with Shinsuke and Cesaro. Zayn called Daniel “a shell of your former self.” He said that Bryan is reduced to asking for “wrestling tips from a nobody.” Bryan stepped up to Zayn and Cesaro said he’s gotta go through him.

Bryan said: “We all know where the ring is. Why don’t you meet me there?” Nobody wanted to mess with Drew Gulak so he left.

Then they re-aired the Tag Team Elimination Chamber match. I’m not kidding. I’ll let you know if they air anything else.

They played 40 minutes of an actual live show and then went to the Elimination Chamber match from last Sunday.

They came back from commercial just long enough for Triple H to make a joke about Michael Cole pooping and them not running out of toilet paper. Then they went back to the Chamber match.

After the match was over, they cut to the ring where The Miz and Morrison cut a promo about how they’re the greatest team ever. Be jealous.

Triple H was holding the camera because “they’re short-handed.”

Michael Cole confirmed that Rob Gronkowski is joining WWE. Mojo Rawley was there and he was there to confirm that the rumors are true. He said that next week “Friday Night Live on SmackDown” Rob Gronkowski will be there.

Mojo was so hyped that Michael Cole had to fix his mic. Then Mojo assaulted Cole trying to get him hyped. Triple H just helped him out.

Then when they came back from commercial they showed action we missed during the commercial break. This has got to be a shot at the article Ringside News just ran.

Cesaro and Bryan continued in the ring and they worked hard in the ring. Cesaro landed a stiff uppercut, they traded holds.

Then Daniel Bryan got a roll-up pin for the win.

After the match, Shinsuke Nakamura jumped in the ring to attack Bryan. Gulak ran in for the save and he took a beating too. They bounced Gulak off the announce table and drove him into the steps. Bryan landed a dive to run off the heels.

Also, Triple H did Michael Cole’s makeup since they’re short-handed. He even colored in Cole’s grey soul patch with a Sharpee marker.

Corbin got things started early before the bell. Elias was on commentary.

Once they returned to the ring, Hardy hit a basement dropkick and an inverted atomic drop to turn things around. Then Jeff hit a back elbow and landed a mule kick before Corbin hit a Deep 6 for a two count.

Elias distracted Corbin with a song and then Hardy hit a Twist of Fate — but Cole called it a Twist Of Fury — twice. Swanton. Hardy wins.

Cena said he’s never seen anything like this before. He gave a lot of positivity. Cole asked him about how he created The Fiend in a lot of ways.

Cena said that people have blamed their failures on him multiple times before. Add Bray Wyatt to the list. That’s a long list of names with potential. It can be dangerous because it can make you lazy and believe your own hype. He said that Wyatt got lazy, gave up, and blamed him.

Cena brought up all the times he’s had to fight through things in the past. He has never gotten lazy and blamed everyone else for his failures.

He said give him a chance and he’ll give him an attitude adjustment.

Cena said WWE needs to invest in their future. Wyatt isn’t part of that future. He name dropped a lot of people like Velveteen Dream and Matt Riddle. He wants to invest in people who earn it every day. He took Wyatt’s WrestleMania challenge so he can take him out.

Cena said it’s going to be uncomfortable to watch. He will end the existence of Wyatt.

Then Bray showed up on the front row. He came in to have a chat. He said that he’s glad John is there even if he’s saying nasty things about him.

Then Bray said that John Cena has him all wrong. He said that Wyatt’s not sick — Cena is. Cena doesn’t care about the future. John Cena only cares about John Cena as long as he’s getting his spotlight.

Wyatt said that Cena craves the spotlight like an addict. He took something from him. Now Wyatt has stopped fighting the voices and he’s listening to them. They took his crooked world and turned it into a majestic fun house.

He said The Fiend put him together and at WrestleMania it’s going to be a slaughter, Cena just doesn’t know it yet. They had a face to face. Then it went to The Fiend saying “Let me in.”

That was the show.