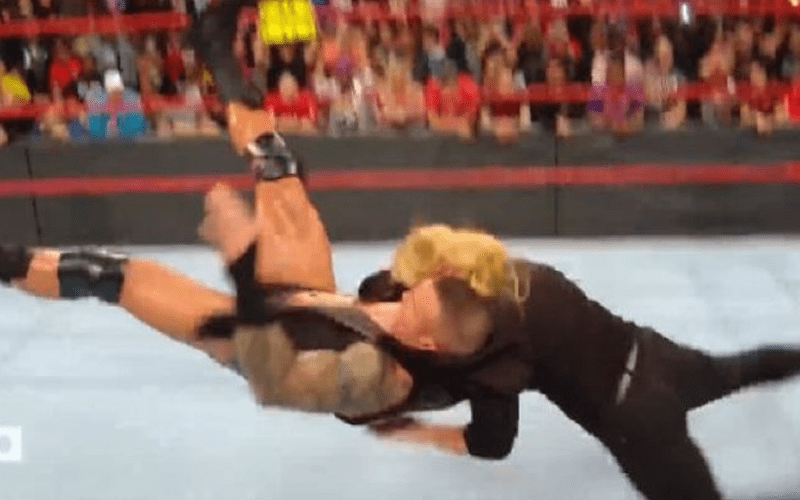 Beth Phoenix is a WWE Hall Of Famer and reportedly in line for a title match at WrestleMania. She was on the receiving end of an RKO outta nowhere this week that we saw coming.

Beth Phoenix went out on WWE Raw to address her husband Edge’s medical status. She didn’t get an entire sentence out before Randy Orton came out.

Randy Orton told a story about when he was 19-years-old. He was a fan. He grew up in the business, but he wasn’t wrestling yet. Orton was backstage at a WWE event and he saw everyone. RKO dropped plenty of names including Davey Boy Smith.

Orton’s father Bob Orton introduced lil Randy to Edge. He said “maybe if you play your cards right we can work together in that ring.” Orton said that motivated him to push harder and it was eventually happening all over the world.

RKO said that back in the day he hit a rough patch and he dug a whole so deep he should have been buried in it. Edge pulled him up from that. Then Randy said Edge saved his life and he returned the favor and saved Edge’s life by taking him out with a conchairto.

Randy said by taking Edge out, now he can take his daughters to volleyball games. Orton said it’s Beth Phoenix’s fault because Edge is a junkie for the road of the crowd and she didn’t stop him. He was yelling at Beth and making her cry.

He said he loves Beth and Edge’s daughters and he loves Edge more than Phoenix ever could. She started crying even more. The crowd chanted “bullsh*t.” Then she slapped him.

Orton threw down the mic and took a moment to stare Beth down. The crowd chanted “RKO.” She kicked him and he RKO’ed her.

Orton left as the Brooklyn crowd cheered for the spot. She laid on the mat and referees rushed to the ring. She eventually sat up as the broadcast ended in an incredibly awkward fashion.