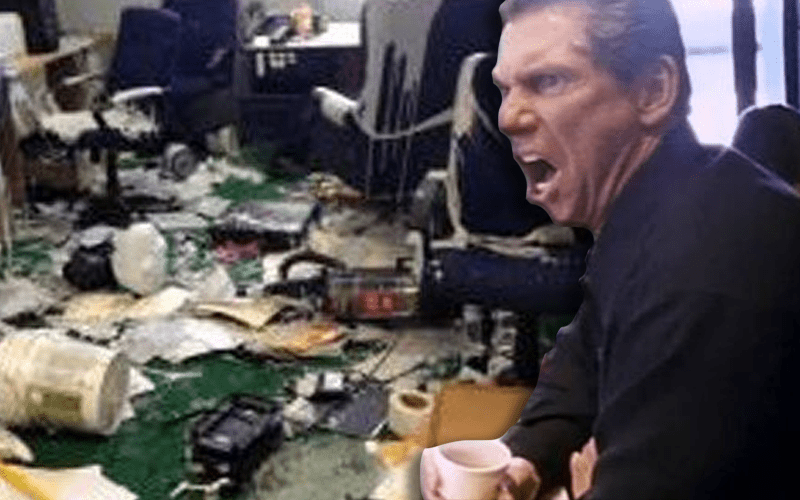 Vince McMahon is the Chairman Of The Board. When he’s in his office it’s best not to disturb him. One scrapped angle totally ignored that idea. Kofi Kingston won the WWE Title at WrestleMania 35, but most people will always consider that event “KofiMania.”

The build to WresteMania in MetLife Stadium was a tough journey for Kofi Kingston. Vince McMahon put up road blocks every time it appeared that Kingston was getting his WWE Title match against Daniel Bryan.

During The New Day: Feel The Power, Big E revealed one angle that WWE cut from the plans. If they would have followed through with this plan the KofiMania build would have a segment we’ll never forget. Vince McMahon’s office would have also been trashed.

“The original plan was that you and I were supposed to go backstage ripping things up on a tear we go to his office. We go to [Vince’s] office and we knock on his door and either he doesn’t answer or he opens the door and says, ‘Oh I don’t have time for you’ or something like that.”

“The plan legitimately and I was so excited for this was that we kick in the door. We tear his office up. Legit throw things over. I think he’s in the office in the corner. We’re throwing tables over and making a mess of his office just going on a rampage and like had this visceral anger about what’s happening to Kofi and one of those things that drove the storyline was that [Kofi’s] story so closely paralleled Bryan’s, but to me didn’t feel it was a rip-off or derivative of Bryan’s story at all and, of course the fact that your pitted against Bryan at WrestleMania when that came. I think some of the language was interesting that He Who Shall Not Be Named talked about you that you were a B Plus player that you weren’t good enough. It was a lot of thinly veiled when you’ve got 13 years of experience like why exactly aren’t you good enough?”

They obviously went a different direction with The New Day’s WrestleMania 35 build. Instead of getting aggressive, they cut passionate online promos. It all seemed to come together perfect in the end. Perhaps WWE will save the idea of trashing Vince McMahon’s office for later because that idea still sounds amazing.