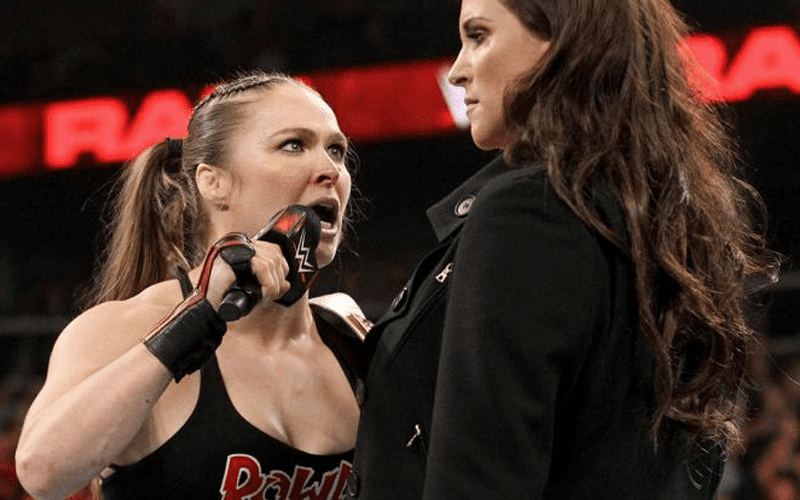 Ronda Rousey hasn’t wrestled since WrestleMania last year. She injured her hand and required surgery while filming 9-1-1 as well. We’re not certain what it taking Rousey so long, but she’s apparently still pitching ideas about her return.

While speaking to ESPN, Stephanie McMahon was asked about Ronda Rousey. The Billion Dollar Princess stated that the Baddest Woman On The Planet is very excited about her WWE return. She’s just not revealing when it will happen.

“I know that she’s very excited about coming back. I think she has some things in her personal life that she wants to do. When the time is right, she’ll be back. I have no doubt about that.”

If anything, Stephanie McMahon would love to see Ronda Rousey make a return in time for them to sell out SoFi Stadium for WrestleMania 37.

“I sincerely hope we have Ronda Rousey back for WrestleMania here at SoFi, only I don’t want to be the one facing her in the ring,” Stephanie said. “I don’t know. It didn’t work out so well for me last time. I think I’ll let her do her own thing.”

Ronda Rousey is not currently booked for WrestleMania 36. She could return and bring a lot of attention to the product. SummerSlam is the next big event following Mania and Rousey has already stated that if she returns it won’t be full-time. Let’s just see what happens in the future, but there will likely always be a place for her in WWE.