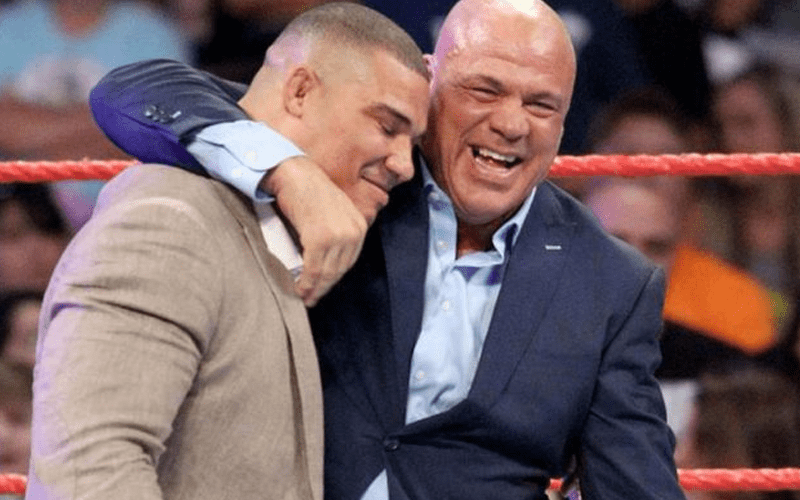 Kurt Angle was receiving some strange messages for weeks back when he was General Manager of RAW. A big secret was set to be revealed, but few fans expected that Jason Jordan would be the Olympic Hero’s son.

While speaking to Chris Van Vliet, Kurt Angle explained WWE’s original intentions for the angle with Jason Jordan. The two were supposed to compete at WrestleMania. That should have been Angle’s final match, but Jordan’s injury caused WWE to change their plans.

“Yes [Jason Jordan was always supposed to be my son]. Jason got injured. That would have been my match at Mania, this past Mania.”

Chris Van Vliet asked Angle if Jason Jordan was originally supposed to be his retirement match. He concurred with this, but then admitted that Vince McMahon didn’t want him to retire so soon.

“Yeah, it would have been [my retirement match]. Vince wanted me to go another year. For the most part, yes Jason would have been my last match and it would have made sense. I adore that kid. He’s so talented and you know he got a lot of heat for being my son and he played the part great that’s why people hated hated him. He was being a spoiled brat about everything. He was using me to get what he wanted. It was a great… Vince was great with that.”

The backlash for being a part of the storyline didn’t bother Angle at all. He thought it was a great way to bring Jason Jordan in as he improved his communication skills with the WWE Universe.

Angle said that Jason Jordan is doing well. He might need another surgery before he can make a return to the ring, but his kayfabe father will be cheering him on the entire time.