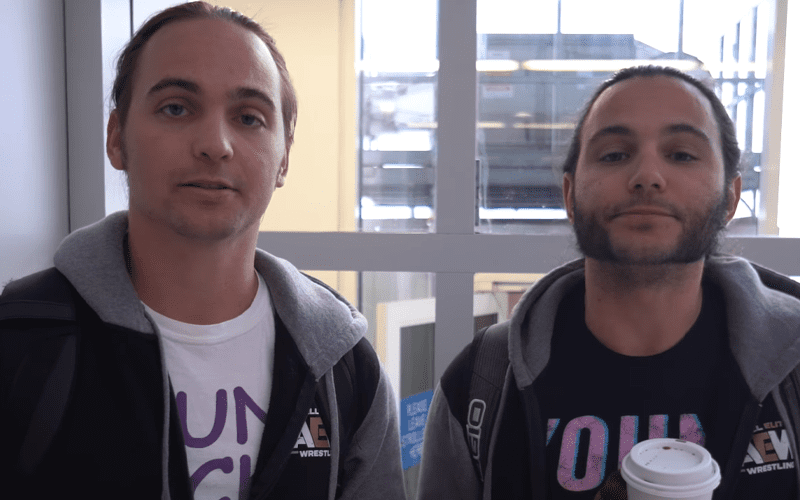 WWE recently got through a bit of a travel issue from Saudi Arabia. Rusev might be going back because he loves money, but other Superstars might not be too eager to return.

During Being The Elite this week, Nick Jackson wasn’t in the mood to talk about Full Gear. Matt Jackson was excited that the Rock n Roll Express was going to be in Baltimore, but Nick was more concerned with what he called “a hostage situation.”

Matt told Nick that they were just in Texas which Nick called a “lawless desert.” Then he said, “I might not be able to see my kids again, are you kidding me?”

Nick said that he was scared he would never see his kids again because they were delayed “an hour to 24 hours.” Matt Jackson just shook his head and walked away after saying, “we’re boarding right now.”

Then the screen went black and they came back with Nick Jackson talking in a robotic way as Matt Jackson reminded him about some important parts to include.

“Due to mechanical issues this flight has been delayed. Please refrain from listening to all the dirt sheets. They are the purveyor of misinformation… and vindictive liars. Sorry.”

This was an obvious joke about how the Saudi Arabia travel situation became such an issue. Superstars sent out very concerning tweets during that time and reporting followed suite. Seth Rollins was an obvious target as they used the same wording that he fired at Dave Meltzer.

It’s interesting that the Young Bucks would commentate on this event during Being The Elite, but this was a very entertaining bit.