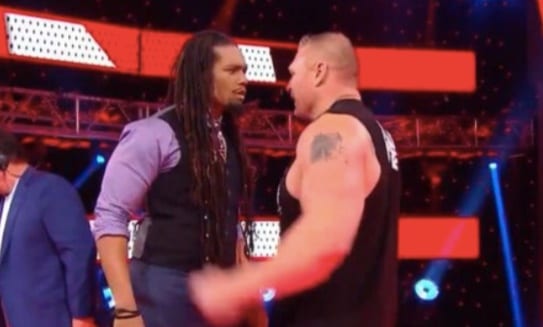 Last night on Monday Night RAW, Brock Lesnar was determined to hunt Rey Mysterio down and make the Mexican sensation pay for beating him down with a steel chair at WWE Crown Jewel.

Alas, once again, it was Rey who was able to get the upper hand as he put yet another beating on The Beast. Prior to that, however, Lesnar came out to the commentary table and demanded that Jerry Lawler tell him where the king of the 619 was hiding.

Dio Maddin didn’t appreciate Brock trying to intimidate his commentary partner, and as such, he stood up to Brock – and was subsequently beaten down by the WWE Champion.

It’s safe to say that this is almost certainly the best thing Maddin has been involved in since coming to the main roster, and while it may not mean much in the long run, it certainly seems as if there’s potential here if WWE can build Maddin back up as a credible threat.

The former NFL star is young and hungry, and we’re excited to see where his potential leads him in the future. Lesnar, on the other hand, is going to have his hands full at Survivor Series when he goes head to head with Rey Mysterio for the WWE Championship.

RAW certainly had its fair share of highs and lows last night, but this was definitely one of the highlights of the show. Whether or not it can lead to anything substantial, of course, remains to be seen.