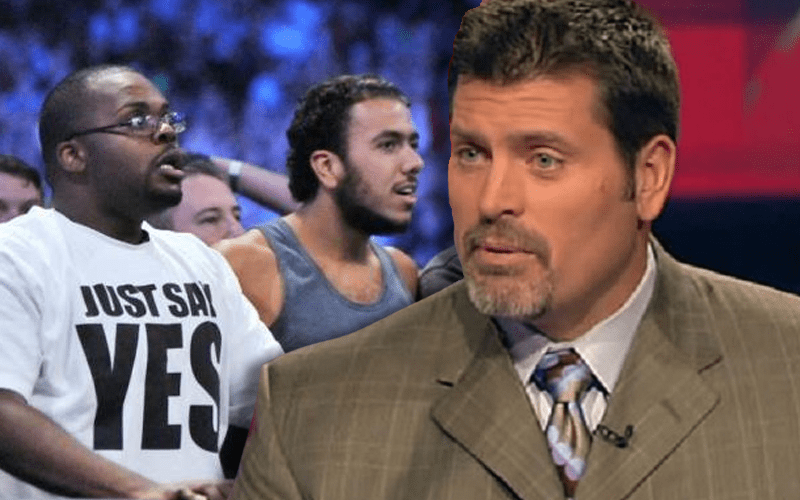 Rey Mysterio was just trying to enjoy an NFL game between the Vikings and the Raiders when Fox announcer Mark Schlereth decided to troll Mysterio by saying he was “like Nacho Libre.” That didn’t make pro wrestling fans very happy at all.

During his podcast, “The Strinkin’ Truth,” the Fox announcer decided to expand on his he felt about the situation after receiving such a backlash from the IWC for his remarks. No, he doesn’t feel sorry about it and that’s likely not going to change.

“I seem to consistently step in it. So I do a promo, because now FOX is in with WWE wrestling superstars and I do a promo with this WWE superstar Rey — God I can’t even remember his… Mysterio!”

“First off, I meet him, great guy. He’s in his mask. I don’t know. I call it — from Nacho Libre, that’s what I know it from. His luchador. Woo, that was great. Luchador [rolling “r”] mask, and so, I’m like… he’s got a spare and I’m like, ‘Oh let me put that on. We’ll go do this together’ and he’s like, ‘Ehh, it’s probably not going to fit your head’ and it’s not that I have a big head, Mike. For an ex-offensive lineman, I’ve kind of got a little tiny peanut head.”

“This guy is 5’7 and maybe 170 pounds or something. His head is small compared to my head. So anyhow, he was right, it didn’t fit so we do this little wrestling promo and it’s silly. It’s 15 seconds, whatever. I meet his son and we’re talking about football and wrestling and all these things and then they flashed him and he’s sitting in the stands with his mask on and we flashed to him and I say something about the luchador mask and Nacho Libre. It was like, ‘It reminded me of the Nacho Libre mask’ you know? And wrestling fan[s] went ape bananas on me like I’m the most disrespectful guy in the history of broadcasting and that’s a superstar of WWE and how disrespectful can I be and I should learn the sport type of thing and I’m just like, ‘You’re kidding me right?’”

These comments aren’t likely to make WWE fans very happy at all, because we really hate hearing someone make fun of pro wrestling.

After all, it’s bad enough that pro wrestling fans have such a stigma to overcome to be considered as “sports entertainment.” Now that WWE is a part of Fox Sports, Mark Schlereth is taking the same rhetoric as a schoolyard bully making fun of a WWE fan for his Rey Mysterio lunchbox.

Why WWE didn’t send the Viking Raiders to a Vikings and Raiders game is beyond me. He probably wouldn’t have talked that kind of trash about Ivar and Erik.

(Thanks to Brad Shepard for passing that along)