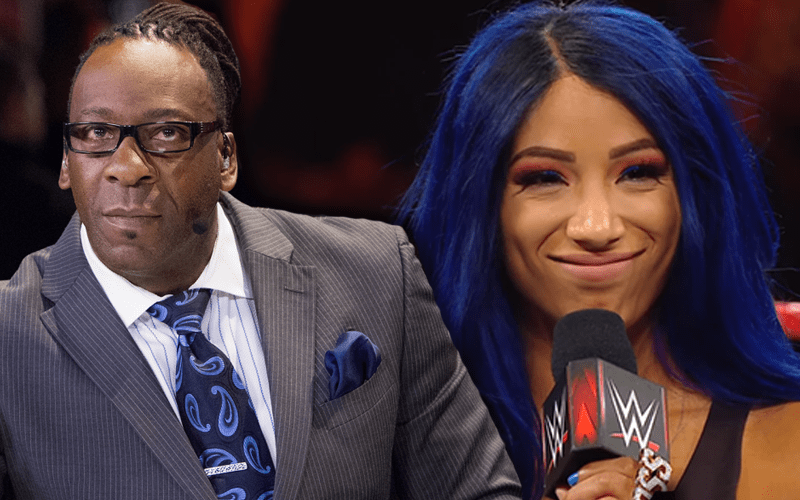 Booker T said some things about Sasha Banks when she first took her WWE hiatus and now he’s taking them back after seeing her return.

On Booker T’s Hall Of Fame podcast, the two-time WWE Hall Of Famer brought up how he had said that Banks was going through an ego trip at the time. He doesn’t believe that now, but instead, he can see the work that Banks put in to becoming an even better athlete during her time off.

“We were talking about when Sasha Banks took some time off and we didn’t know if it was personal, if it was business related, we didn’t know if she was having an ego trip or what. A lot of that was being reported, and my thing is, I didn’t know because I hadn’t talked to her, and I didn’t want to say this or that. I did make certain comments though and my thing is, I totally took that the wrong way… She did take some time off, and one of the things I always say is, ‘Out of sight, out of mind’, ya know? There’s always somebody there looking to take your spot and all of that is true. But then again, you really never know why a person takes a step back.”

“You look at it from the outside looking in and you go, ‘Man, they should be happy! They’re making all this money, they’ve got this fame – do you know how many people would want to be them and be in that spot?’ Those are the outside people looking in, those are the critics on social media, ya know?” Booker continued. “You can tend to get wrapped up in that and caught up, so I took a step back and I thought, man, let me rethink this thing about Sasha taking time off. Especially after she’s come back because she looks great. Her body looks like she’s filled out, she looks thicker like she’s been in the gym training, and enjoying life a little bit and relaxing. And the impact that she’s made since she’s come back has been like, ‘Boom!'”

Sasha Banks landed in a much better position upon her return than when she exited. Now she is set to do battle at Clash Of Champions against Becky Lynch and even though that match hasn’t been 100% set just yet, the writing is on the wall that it’s only a matter of time before WWE confirms it.

Booker T isn’t the only one who has noticed what Banks is bringing to the table because Paul Heyman is also going to be instrumental to her new character as well.