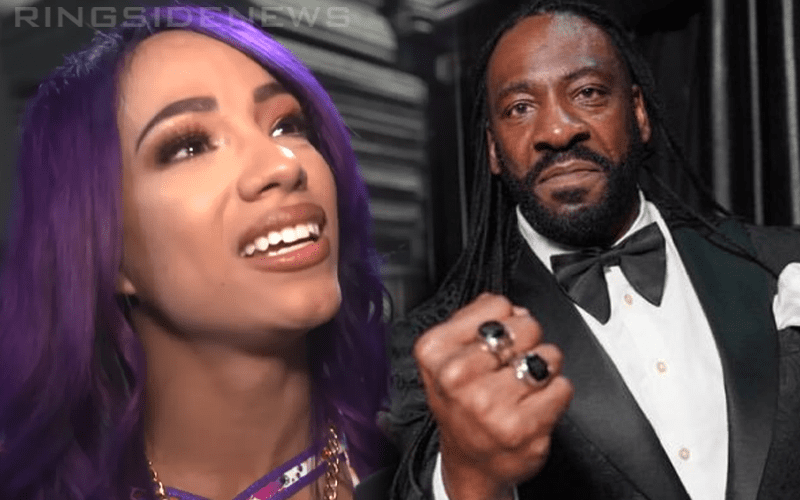 Booker T knows a lot about what it takes to make it in the pro wrestling business. The two-time WWE Hall Of Famer is very happy to share his advice and recently imparted some words about Sasha Banks’ current situation during his Hall Of Fame radio show.

The Harlem Heat member said that he’s been given scripts in the past, but he never really cared what it was. This is one of the reasons why he is still around today. However, that never stopped him from sticking up for himself if there was something in there that he didn’t believe in.

“I don’t write the script and that is one of the reasons why I am here today. I never really cared about what the script was. Give it to me and let me go out and get it done. If it was something that I didn’t disagree with, I was going to go out there and get it done. If I had disagreed with it, I would have said, hey, I don’t agree with this. Let’s change this because I am not doing it this way, then they would change it, and that is the way business has always been done with me. I can’t say that with everybody, but with me that was how it was done.”

The trick is to look at pro wrestling as entertainment. Booker further explained how it is no different from any script. You might not love your part, but it is still yours to play.

He said someone like Ember Moon has the right to complain, but Sasha Banks really doesn’t. The Boss has received a ton of opportunities in the past that others would love to have. So he doesn’t understand that part.

“I am going to tell you right now Sasha Banks has had more life-changing moments than so many that have walked into this business. She is made and she can do anything she wants as far as this business goes from what she has gotten from this business.”

“Hey man, for me, it was all about the money and taking care of my family and to create moments along the way and memories to be able to touch people and at the same time being able to change their lives.”

We will have to wait and see if the stalemate with Sasha Banks will improve, but she might not be back for a while. This was especially apparently when her Money In The Bank spot presumably went to Dana Brooke.