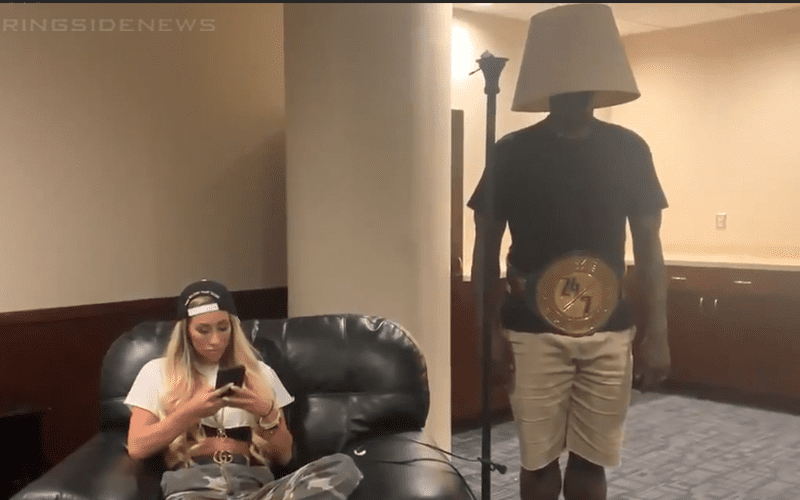 R-Truth is getting very good at running to keep his WWE 24/7 Title. He event came up with a parody to Old Town Road where he sang all about it. He is also very good at hiding too.

During Smackville last night, R-Truth didn’t make the broadcast, but it turns out he was busy backstage trying to stay incognito. Carmella uploaded a pretty great video showing how he managed to make it though the night without being noticed.

R-Truth put a lampshade on his head and stood very still. Therefore, people just thought he was a tall lamp. It seemed to work for the IIconics as they didn’t notice anything was out of the ordinary at all. The WWE Women’s Tag Team Champions did ask why Carmella brought her own lamp. Mella said she’s afraid of the dark and then they suggested that she try to turn the lamp on to get some light.

After Carmella was unsuccessful in illuminating the R-Truth lamp, Billie Kay and Peyton Royce left looking for the makeup area. So it looks like that was a close call, but R-Truth was able to trick them that time. It’s a good thing they were fooled too because Drake Maverick was at Smackville too beating the streets of Nashville in search of R-Truth and his title.