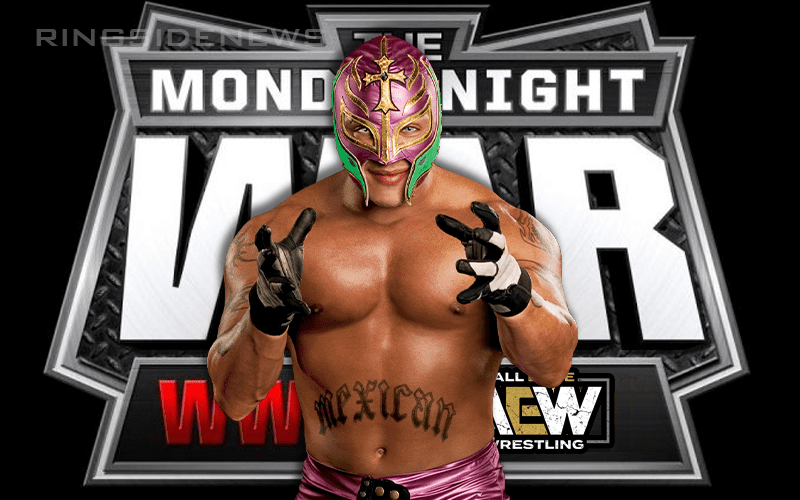 AEW is starting up on TNT in the Fall which brought a lot of fans to immediately draw a correlation to the Monday Night Wars between WWE and WCW. Rey Mysterio was around during that time and he had a very interesting viewpoint about the competition that AEW will provide.

Mysterio recently spoke with Wrestle Zone where he was asked about the emerging competition that AEW brings to the table. He said that it can only be a good thing as everyone will step up their game.

He wasn’t very political in the first Monday Night Wars, but he could always find himself being a bigger player in this second phase of pro wrestling warfare.

“You know if I’ve gotta go back and reminiscence about that Monday Night War Era it was definitely a very entertaining stage for the fans because they had a variety of wrestling that they could watch. They can tune in here or tune in there or go back and forth you know depending on what your preference was.”

“For me in particular I wasn’t too hooked into the political side of it. So I was just enjoying myself every time I had the chance to perform in front of a live audience.”

“It’s definitely great for business any time that there’s a variety of something that you really like it’s a good thing. It’s even good for the morale inside the locker room. I think we definitely need to be on our A-Game. We don’t wanna be B or C so we’re gonna have to step up our game and that’s always good for business.”

We will have to wait and see where this new pro wrestling war leads. AEW only wanted to provide an alternative for fans, but it might be impossible to avoid a war at this point as Chris Jericho pointed out.

Rey Mysterio was around the Monday Night Wars and over twenty years later we’re seeing another legitimate competitor rise up to WWE. With Mysterio’s WWE contract being a short one you also never know where he might be tempted to perform as well, but as we previously reported he’s discussing signing a longer deal with WWE already.