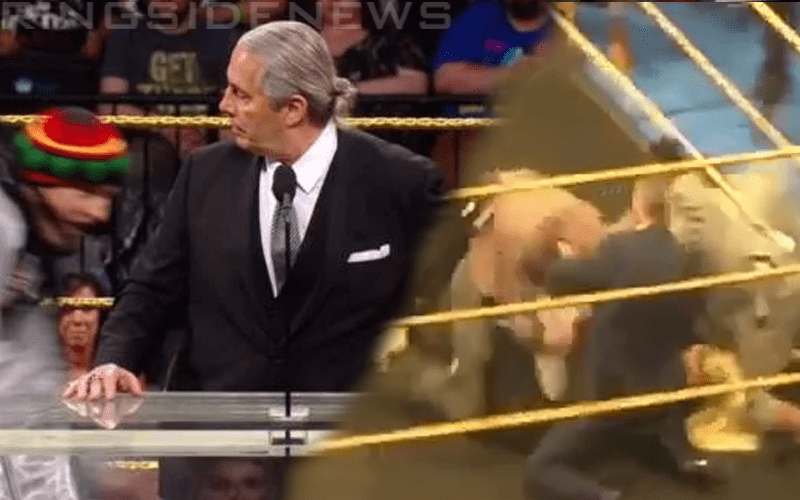 Bret Hart received his second WWE Hall Of Fame ring this year as a member of the Hart Foundation. Jim Neidhart was sadly not able to be there as he passed away, but his daughter Natalya was proudly standing next to her uncle Bret. Then a rogue “fan” jumped the barricade and got in the ring to attack The Hitman.

The attacker didn’t get very far at all before Travis Browne jumped in the ring and then that “fan” had a terrible experience. Even Dash Wilder got in a sick uppercut on the guy as they dragged him out and Mark Carrano took a kick from Harry Smith by accident.

While speaking to Sunday Night’s Main Event, Bret Hart revealed some crazy motives that he heard his attacker might have had. His attacker told the court that it just felt like the right time to do it, but other people have told Hart that this “fan” might have done this out of loyalty to Vince McMahon Jr.

“I heard various theories and things that were put forward. I heard he was a devoted fan of Vince’s that he loved Vince McMahon and I’ve heard the other way around that he wanted to do harm to Vince and by doing harm to me was doing harm to Vince.”

“I don’t know which of those is true. I don’t care too much to talk about it because that’s what they want. They just want the attention. They want the headline. They want us all to talk about it on the radio right now. This is the first time I’ve talked about it. I feel bad it happened. I don’t feel bad for him. He got hurt pretty good, I think. Some of the wrestlers that jumped on him landed on me pretty hard by trying to protect me which I appreciate but it’s a better left unsaid kind of thing.”

Bret Hart’s attacker faced two counts of assault along with criminal trespassing. He has yet to be sentenced, but the court system is still dealing with him as he awaits trial.

Hopefully, this will be a big lesson for anyone else who would like to try and do something similar. Because this amount of disrespect for Bret Hart caused a slew of angry trained fighters all over the arena to leap in the ring and make sure this kid had some respect beat into him.