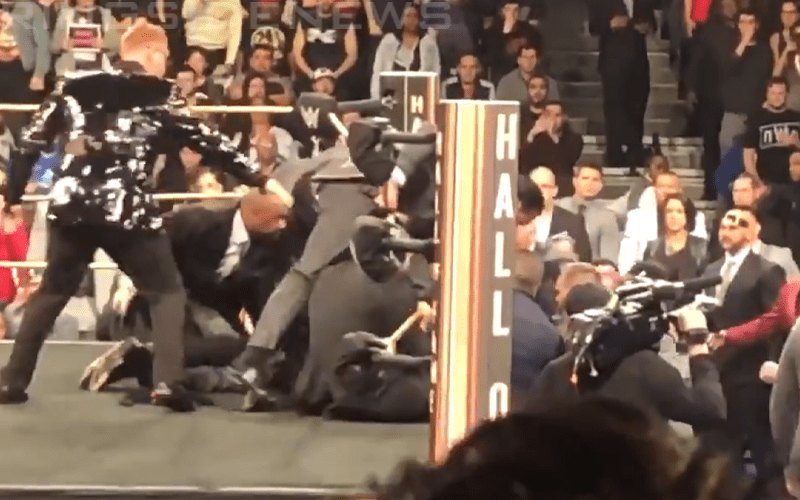 Bret Hart’s WWE Hall Of Fame induction speech was rudely interrupted as he was tackled. However, Hart’s attacker really got what was coming to him.

Hannible TV recently spoke to Harry Smith about that WWE Hall Of Fame fiasco because he was right there in the chaos.

Harry Smith said that he would have gotten to the ring sooner if he would have been closer. Instead, he was seated closer to the entrance. Smith admitted that since he never knows what Vince McMahon or WWE is planning he thought it could have been a work. Then things got serious when he realized it was for real.

“I thought it be a work. It could have been Enzo to come out and Bret put him in a sharp shooter, who knows?”

Then when the “idiot came down” and Smith saw everyone climbing on top of him, he ran to help. In the melee, Smith threw a kick and accidentally hit the wrong target. Instead of kicking his uncle’s attacker, Harry Smith nailed
WWE Senior Director of Talent Relations Mark Carrano. It was a total accident because if he realized it was Carrano, Smith would have kicked harder.

“I have a ring so I was punching [the attacker] pretty hard. I think I might have cut the back of his head. I was trying to punch him pretty hard. If I would have gotten closer to him I would have probably done something a lot worse to him, ya know? I didn’t which is a good thing because I wouldn’t want to get in any trouble with that. I could have done something pretty nasty to him.”

“It was funny, you couldn’t see it, but when we were all by the exit area we were all crowded around and I went to kick him and Mark Carrano was in the way and I kicked Mark Carrano in the kidney. I apologized to him later and I got him a drink and said ‘I’m sorry about that.’ I said: ‘I didn’t know it was you.’ He said, ‘yeah if you would have known it was me you would have done it harder probably’ and I started laughing.”

Bret Hart’s attacker is currently in the legal system awaiting trial for the two counts of assault and criminal invasion charges he is facing after his stunt at the WWE Hall Of Fame.

It is great that so many people like Travis Browne and Harry Smith were able to help out Bret Hart. Dash Wilder also earned a load of respect for popping the dude with an uppercut. Hopefully, that will encourage people to never try anything stupid like that again because he had an army of skilled fighters all around him scrambling to tear him apart.

That attack also might be why Vince McMahon is considering not letting fans attend the WWE Hall Of Fame anymore.