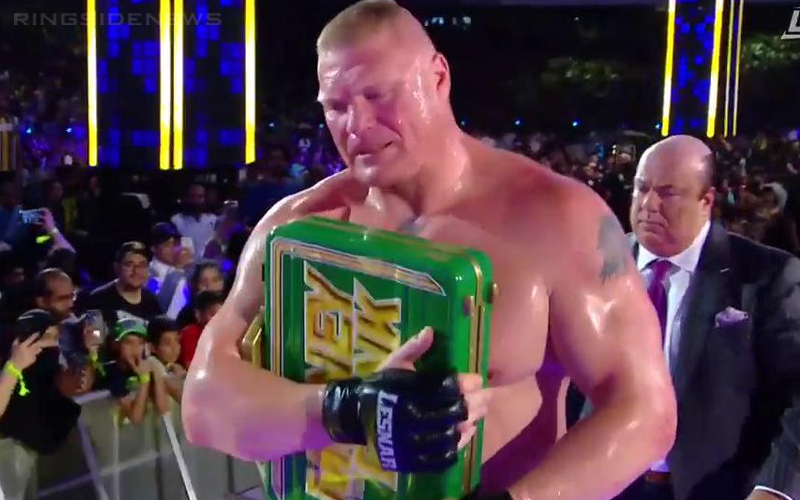 Brock Lesnar has been teasing cashing in his Money In The Bank contract since the night after he won it. Last week on Raw he finally declared when he would cashed in, but it wasn’t for that night.

Seth Rollins came out and wanted to call Lesnar out right there. However, Baron Corbin came out and took advantage of Rollins. After hitting an End Of Days, he left Rollins alone in the ring.

Brock Lesnar then came out with a chair and a referee while Paul Heyman walked behind them carrying the Money In The Bank briefcase. Brock started throwing in chair shots and he hit a German suplex.

Paul Heyman asked Lesnar if he should cash in the contract now, but Lesnar said not now as the assault continued without the bell ringing to start an actual match. Lesnar hit an F5 on the outside and then returned to the ring where he hit Rollins with some more chair shots.

Heyman pleaded with Lesnar to let him cash in the contract, but Lesnar didn’t want to do it. Instead, Brock just said, “Friday.”

It looked like Brock Lesnar would be cashing in his Money In The Bank contract at WWE Super ShowDown in Saudi Arabia.

Rollins was bleeding from his back after those chair shots and Lesnar went back to the ring to deliver some more shots with his MITB briefcase before leaving. Then Rollins was carted away on a stretcher and a neck brace. They loaded Seth Rollins in the ambulance and Becky Lynch was right by his side the entire time. That was a nice touch.

When the Super ShowDown came, Rollins vs Corbin opened up the event with the Universal Title on the line. The champion’s ribs were taped up and Baron Corbin focused on that portion of The Architect’s body throughout their match.

Seth Rollins ended up getting the win as he rolled Corbin up after the referee caused Baron to back up because he was screaming in his face. After the match, Baron Corbin hit an End Of Days and then Brock Lesnar came down with the briefcase and another steel chair.

Heyman tripped while getting in the ring and the MITB briefcase fell. Then Rollins started unloading with steel chair shot while daring Brock Lesnar to cash in his contract.

Then Rollins nailed a curb stomp on Brock Lesnar with the MITB briefcase under his head. They played Seth Rollins’ music and the Universal Champion got away with Lesnar laid out in the middle of the ring.