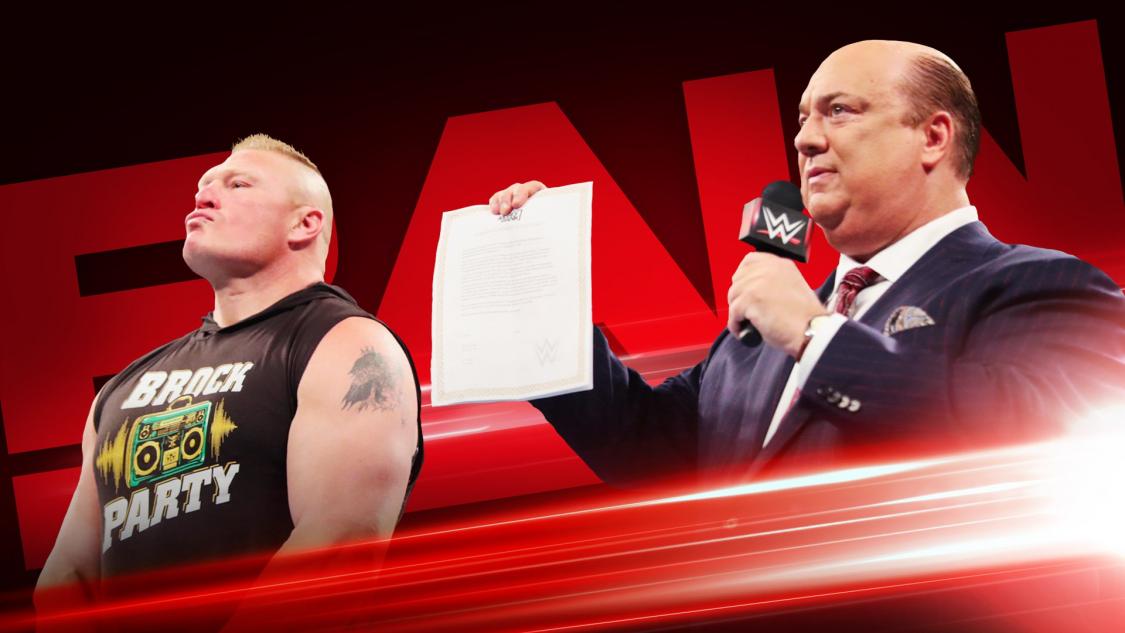 Tonight’s Raw comes hot off the heels of a huge week in wrestling, although that wasn’t because of Raw. No, it was another week of bad ratings for Raw, so tonight Vince is going all out. After saying last week that Lesnar had a full year to cash-in and would take the liberty of waiting for the perfect moment, WWE “management” has forced Lesnar’s hand and he will cash-in tonight. Yep, Brock is supposedly cashing in on Seth Rollins tonight. Whether it actually happens or is yet another cheap attempt at getting viewers, is another matter.

This Friday is WWE Super ShowDown in Jeddah – because WWE is terrified of saying Saudi Arabia for obvious reasons. That means tonight The Undertaker is scheduled to appear and hype his preposterous match against Goldberg. On top of that we can expect some developments on the makeshift feuds between Triple H and Randy Orton, Braun Strowman and Bobby Lashley, and so on.

Also tonight, Rey Mysterio must vacate the United States Championship, Roman Reigns teams with The Uso’s to face Drew McIntyre and The Revival, and Becky Lynch continues to fend off Lacey Evans. WWE is in a very interesting moment right now because something really needs to change but the product is languishing, so each week is something of a powder keg.

A powder keg that you can follow by downloading the Ringside News app, following us on Instagram and Twitter, or just watching along with us. Regardless, enjoy the show!

Monday Night Raw opens from the University of Texas and Roman Reigns makes his way ringside.

As Roman makes his way to the ring we’re reminded that he will face Shane McMahon at Super ShowDown on Friday. The announcers also mention that Brock Lesnar will be cashing in his Money In The Bank Briefcase – because WWE Management reprimanded Brock for behaving poorly in recent weeks.

Before Roman can speak a word, out comes Shane McMahon. He says he’s owed a proper introduction, and instructs Mike Rome to do so. Shane says he hasn’t been sleeping because he can’t wait to shut Roman up on Friday. He says he isn’t just called the best in the world, he actually is just that. Shane likens himself to fine wine. He runs us through the match, explaining how he will beat Roman. He says he wouldn’t be satisfied with making Roman tap for the first time in his career, no, he intends on tightening the triangle choke after Roman taps until his eyes bulge.

Roman shuts him up and says he would love for Shane to try. He says if he even tries to put that “little move” on, he will lift him up and slam him down. Roman says he’s tired of Shane’s spoiled ass, hiding behind henchmen. So once he’s done beating Shane at Super ShowDown, he’s gonna beat Drew at Stomping Grounds in two weeks.

Of course, The Revival then attack Roman from behind. Drew and Shane join forces and attack Roman. The Uso’s run down and make the save, clearing the ring.

We start the match with Dash Wilder and Jimmy Uso. As soon as the bell rings Uce superkicks Wilder. He then goes up top for the splash but Scott Dawson pulls Wilder from the ring.

The Revival regroup on the outside but Jimmy and Jey hit the ropes and wipe them both out with dives to the floor.

We’re back from the break as Scott Dawson misses Jey in the corner. Tags made to Jimmy and Dash, and the former wipes the latter with clotheslines, uppercuts, and an enziguiri.

Jimmy Uso knocks Drew and Dawson off the apron, but Dash Wilder capitalises off the distraction and knocks him down. McIntyre tags in and chops the life out of Jimmy in the corner. Drew hits a deadlift suplex for a near-fall. Drew keeps Jimmy grounded with an armlock.

Uso fights to his feet but is tossed across the ring with a belly-to-belly. Dawson tags in and stomps on the head of Jimmy, before pulling his hair. Dawson applies a submission but Jimmy escapes and lands a back suplex. Dawson responds with a spinebuster for a near-fall.

Back from the break and things are disjointed. Roman looks for a Superman punch to McIntyre but nobody’s home. McIntyre connects with a Glasgow Kiss, but Uso enziguiri’s him from the apron. Roman then hits a Superman punch, followed by one to Dawson on the apron.

Shane gets on the apron and distracts Roman, who chases him. Drew then hits Roman with a Claymore Kick on the outside, and The Revival hit Uso with a Shatter Machine on the floor. Inside the ring, Drew hits a Claymore Kick to Uso and scores the pinfall.

After the match The Revival bring Roman into the ring and hit the Shatter Machine. Shane then lifts Roman up and makes Drew hit him with another Claymore Kick. Shane then lays down beside Roman and talks trash. Shane instructs them to lift Roman, and he runs and spears him, then does Roman’s taunt.

Still to come, Brock cashes in, Triple H comes face to face with Randy Orton, The Undertaker talks Super ShowDown, a new episode of Firefly Fun House, and Seth Rollins will be on MizTV.

We come back from the break and The Miz is in the ring. He welcomes us to MizTV. He says tonight is not about him; tonight is about Brock Lesnar’s Money in the Bank cash-in. Miz then introduces Brock’s victim and Seth Rollins makes his entrance.

Miz says he has a Universal Championship match against Baron Corbin at Super ShowDown, however that could all change tonight if Brock is successful. After all, Paul Heyman said his client would cash in Money in the Bank tonight.

Rollins says Miz is making a lot of assumptions; assuming Brock Lesnar will show up; assuming Paul Heyman is telling the truth. By his records, Heyman has never told the truth. Rollins says he’ll believe it when he sees it. Miz says they’ve both won the Money in the Bank contract and picked opportune times to cash it in. He says it’s not in the hands of the typical WWE Superstar, it’s in the hands of Brock Lesnar.

Rollins says Miz doesn’t have to oversell it to him. If Lesnar showed up and cashed in, he’d be relieved because he can’t keep focusing on what might be. Rollins has to focus on what will be. This Friday, he will be defending his title against the #1 contender Baron Corbin. He reiterates that no one likes Baron Corbin, but he did win the Fatal 4-Way last week. If he’s going to be the fighting champion he promised to be, then he’s got to focus on Corbin and focus stomping his head into this mat.

Brock Lesnar and Paul Heyman are shown arriving in the arena. They make their way towards the entrance area but stop, turn, and walk off down a hallway. Rollins is shown angry in the ring, he doesn’t want to be made wait.

The Lucha House Party make their way down to the ring followed by Lars Sullivan. Apparently not for a sanctioned match though, they’re just here to fight. A brawl breaks out and Lars is clearing house. The Lucha’s make some headway with a springboard dropkick, then knock Lars from the ring. He gets angry, roars, then walks off.

We see Nikki Cross backstage, looking sad. Peyton Royce and Billie Kay are there and making fun of Cross. Alexa Bliss appears and calls them witches. They says they have better places to be, say their catchphrase, and walk off. Alexa then offers to get Nikki a coffee and she’s surprised. Alexa says she understands what it’s like but offers to be in Cross’ corner tonight. They walk off arm-in-arm.

Becky Lynch makes her way into the arena for the pop of the night so far. She’ll be talking after the break.