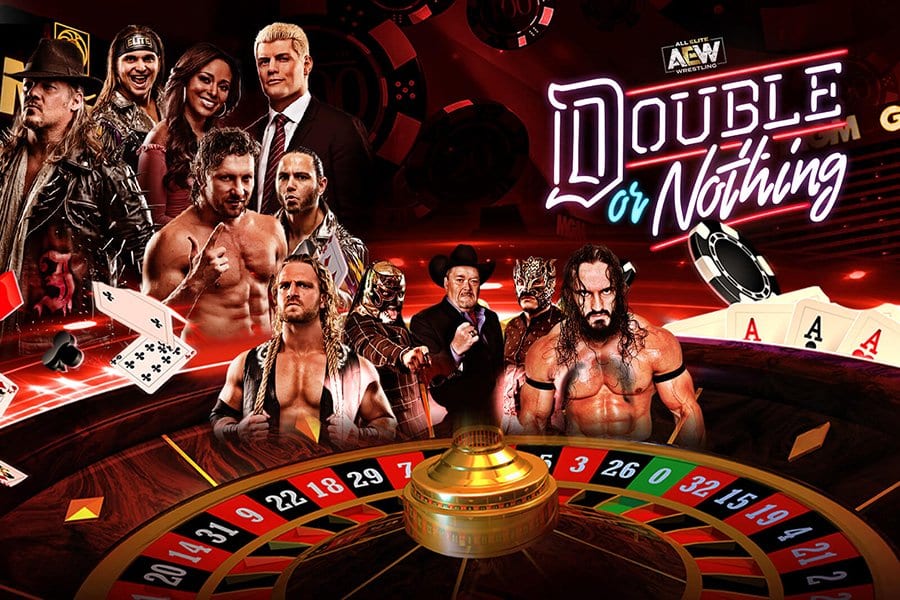 AEW’s first big chance to show the world takes place on May 25th, 2019. If it hasn’t happened yet then check back at 7:00 PM when everything kicks off.

All Elite Wrestling has a television show on TNT to look forward to later this year, but they need to bring it at Double Or Nothing. They have a very strong chance of making that happen too because The Elite has booked an incredible card for their first event.

Chris Jericho vs Kenny Omega is advertised as the headlining match, but the entire card is full of people striving to make AEW a legitimate alternative to WWE. Despite all of the action on the show, the only title on the line is in the AAA Tag Team Title match with The Young Bucks vs The Lucha Bros.

However, the winner of the Casino Battle Royale and the winner of Jericho vs Omega will compete at a later date to become the first-ever All Elite World Champion.

You can check out the matches below, but you can also never count out a few big surprises. Because AEW could be the destination for any number of top names in pro wrestling.

Check back at 7:00 PM and we’ll start the live coverage.

This Buy In featured this crazy battle royal match. Men came down in four sections and then there were some crazy spots. You can check out the entire show for free by clicking above.

Hangman Page was a big surprise as a wildcard who kept up the narrative that he has a bad knee thanks to Pac. Page and Joey Janela soon re-sparked their ALL IN feud. Ace Romero was also very large and impressive as he eliminated Marko Stunt and then Jungle Boy took him out to pop the crowd.

Dustin Thomas, a wrestler with no legs was almost about to get eliminated by MJF, but Shawn Spears saved him. Then Thomas eliminated Spears.

MJF continued to get heat from the crowd with everything he did and then Luchasaurus chokeslammed Joey Janela through a table that was set up at ringside.

Soon we had four left with Hangman Page, MJF, Jimmy Havoc and Luchasaurus. Naturally, everyone beat down MJF first and he left the ring, but remained in the match as he went under the bottom rope.

Then Havoc was eliminated after being lifted to the apron and getting a big boot from Luchasaurus. Page eliminated Luchasaurus and then MJF came back in and thought he tossed Page over the rope, but Page was able to hang on and win the match.

Sammy walked to the ring wearing a panda headdress. Hopefully, he didn’t really kill a panda for that one.

Guevara played a wonderful heel in this match as they started what was called the first-ever singles match in AEW, however, we already got that Pac vs Page match at the Wrestle Gate show that AEW paid for so that accolade will always be a matter of contention.

Guevara were evenly matched as they both got a chance to show off. Sammy ended up getting the best of Sabian and the crowd popped, but Guevara gloating afterward turned the crowd against him.

Sammy went outside and then Sabian hit him with a springboard dive after Guevara thought that he avoided it. Suddenly, Guevara ran in and hit Sabian with a dive to match him that nobody saw coming (even the cameraman).

Guevara hit Sabian with a moonsault splash twice, but Sabian kept rolling out of the way. Finally, Sammy nailed him with a moonsault for a two count. The Sabian nailed a springboard dropkick after creating some separation.

Sabian and Guevara took it outside where Sammy nailed a shooting star press off the apron to the floor. Sammy went for a 630, but Sabian countered and hit a Deathly Hallows for the win.

It’s time to officially kick off Double Or Nothing and they had a six man tag team match up first. The representatives from OWE will face off against Scorpio Sky, Christopher Daniels, and Frankie Kazarian.

Surprise: Las Vegas is the worst town that Scorpio Sky’s ever been in. Cima and Daniels started things out and then tagged out.

Kaz got the upper hand over T Hawk using his strength and then Scorpio Sky took a blind tag to dropkick Hawk out of nowhere. T Hawk hit a powerbomb for a two count and then Kaz and Daniels were taken out to isolate Scorpio who took a splash for a two count.

The SCU started to rally as they continued to use their tandem ability against their opponents. Then T Hawk took a pin and Strong Heart started to gain the upperhand on SCU as they removed Kazarian and Sky from the situation to focus on Daniels.

Daniel created an opening and he tagged in Sky who started to rally. He hit some strikes and a stomp on Cima’s back to send him out. However, T Hawk hit a knee to the face followed by a German suplex for a close two count from L Lindeman. Sky reversed a sunset flip to dropkick Lindeman in the face and then he tagged in Frankie.

Kaz pulled off a roll-up/bridging German suplex for a two count on two competitors and then Daniels nailed a suicide dive on Cima to the outside and he almost took out ring announcer Justin Roberts.

Then Sky went for a running move, but Lindemen tripped him up and nailed a low dropkick to the face. Kaz was sent to the floor and then T Hawk and Daniels hit each other with double clotheslines to take each other out.

Daniels hit an Angel’s Wings on Hawk, but Lindemen took a blind tag to hit a move for a near fall followed by a top rope knee drop from Cima for another near fall. Soon Hawk and Cima were out of the ring and Sky nailed a dive over the top rope.

Soon Lindeman got hit with a Best Meltzer Driver Ever for the pin.

Allie joined the announce team for this match. Kylie was legit taken aback by her pyro and it was awesome to see how happy she was to be there.

Then Brandi Rhodes walked out after weeks of hyping up different women in the match. She was dressed to wrestle and then she inserted herself in the match. She said not to think that she lied to them because she meant that either of them could win and that the triple threat match could be a great match. The problem is that she wants a match that is awesome. Then she introduced Awesome Kong.

The crowd popped huge when Awesome Kong came out and Nyla Rose was not happy. In fact, nobody was very happy about this except for the fans.

Kong and Rose got face-to-face early on and then Kylie tried to lock on a sleeper, but it didn’t work. Britt tried next, but Kong just slammed Britt onto Kylie. Then Kong missed a big splash and was sent to the floor.

Baker and Rae had some one-on-one action where they traded advantage which resulted in Britt mocking Kylie’s smiley taunt. Then Kylie charged the corner, but missed Britt before Baker tried a crossbody block on Kong who caught her. Then Kylie hit Kong with a suicide dive while she was holding Baker.

They eventually set up for a tower of doom which Awesome Kong got on the bottom of. This caused Kylie and Britt to superplex Nyla Rose off the top rope while everyone got powerbombed by Kong. They were working so hard in this match.

Britt and Kong moved outside where the former Knockouts Champion nailed Baker with a sick spinning back fist. Britt was able to dispatch of Kong and she went back in the ring to deal with Kylie Rae and they started trading shots.

This marks the first two vs two match in AEW history. They’re making a lot of history.

Chuckie and Trent took ontrol of this match early on, but when they went for a signature hug, Evans and Angelico dropkicked them into each other.

Evan mocked the crowd while Trent sold for them and then Evans stretched Trent’s body while Angelico hit him in the face with a running kick.

Trent took even more abuse, but then Chuckie jumped in to break up a stretching submission hold, but it didn’t help Trent for long.Angelico missed a charged to the corner as he caught some boots to the face, but Taylor was off the apron so there was nobody for Trent to tag.

Then Trent nailed a clothesline on Evans and he finally tagged Chuckie T who took down Evans a couple of times before Angelico ran in. Then Taylor threw Evans into Angelico in the corner and Chuckie followed it with a falcon arrow for a two count.

The Best Friends ganged up on Evans and nailed a couple double team moves and then they finally got to hug in the ring as the camera hit the Okada zoom out. They nailed a Crusher for a two count.

Angelico and Evans stopped Beretta in his tracks with some double team work and they took control. Trent backed up and ran at Angelico who lifted his knee to the face before nailing Beretta with a crucifix to the corner where he ran across the ring to connect with the top turnbuckle on the other side. Evans hit a dive for a two count.

When Chuckie broke up the two count huge “AEW” chants broke out. They revealed on commentary that there are 30 minute time limits in AEW too. THAT’S USEFUL INFORMATION TO KNOW.

This was a great/weird thing to have happen. BTW, the two men were Stu Grayson and Evil Uno, but they were not named on the broadcast at all.