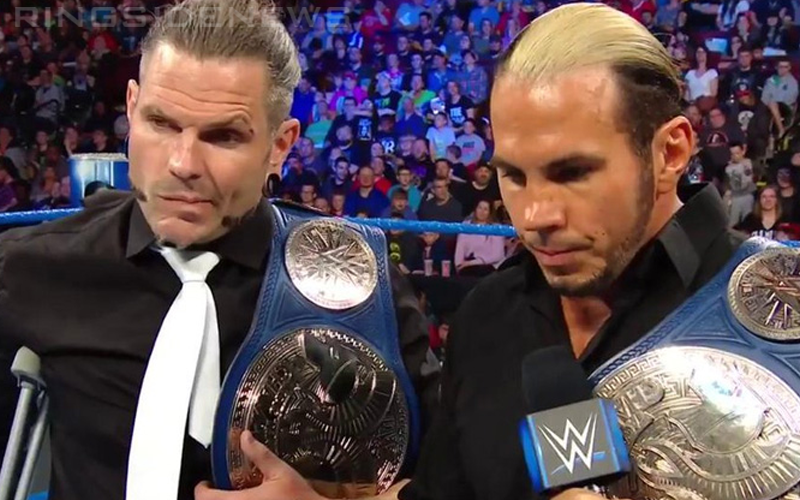 Jeff Hardy is injured and he will be out 6-9 months. This was a big shot for WWE’s SmackDown Live brand as The Hardy Boyz hadn’t been given the chance to defend their titles once.

Due to his injury, Jeff Hardy and Matt Hardy showed up on SmackDown Live to relinquish their titles. This was a sad moment that was eventually ruined by a Lars Sullivan attack. The Freak is getting credit in the storyline for injuring Hardy although Jeff actually suffered his injury during the April 20th house show.

Dave Meltzer brought up Jeff Hardy’s injury during Wrestling Observer Radio and why WWE didn’t present any future plans for their blue brand’s belts. As it turns out they just haven’t had the chance to consider it yet.

He also said that WWE has “had other more pressing things and haven’t come up with an idea.”

It was pretty much assumed that due to Jeff Hardy’s knee injury WWE would have The Hardy Boyz drop the titles, but apparently, the company didn’t think figuring out a next step was that big of an issue.

SmackDown Live’s tag team division could be in some real trouble with The Hardy Boyz out of action because they don’t have another top babyface team on the blue brand. Therefore, it might be a good idea to start getting those plans on paper so Vince McMahon can reject them all only to accept one and then likely change it again on the day of the show.