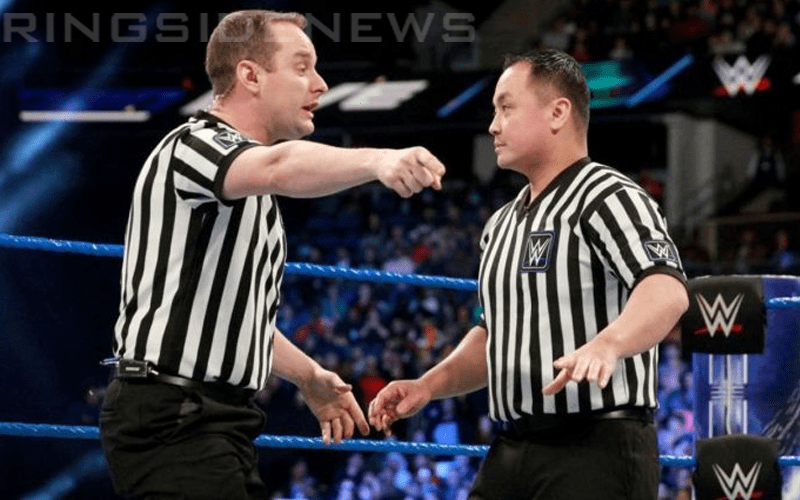 WWE holds their referees to a certain set of standards. They must be aware of a lot while constantly keeping track of what is being told to them in regards to the match’s progress. They also must count pinfalls like they are a shoot. This did not happen at WrestleMania and the three count took place despite the fact that Ronda Rousey’s shoulders weren’t on the mat.

WWE referee Rod Zapata was fined due to this WrestleMania botch as Vince McMahon placed the blame on him for continuing the count. This has apparently created some extra concern for WWE’s referee staff and those in production.

Sean Ross Sapp said on a Fightful Select audio update that a lot of WWE’s referees and production staff are now “on edge” following WrestleMania. Because nobody wants to be caught doing the wrong thing.

“I know that the refs are a little bit on edge after what happened to Rod Zapata at WrestleMania.”

There is a lot gong on in the ring and a referee must be able to make sense of it all. The IC Title match during The Shield’s Final Chapter special was botched and it isn’t clear why the count was stopped, but Finn Balor and Elias had to continue on and transition right into another pinfall that eventually worked to end the match.

We might see more instances of things like this if WWE referees continue to second guess themselves or whatever the reason was for that botch. Because the pressure is apparently on them in a big way to do the right thing as the WWE Universe keeps their eyes on what they do in the ring and that includes a very watchful eye from Vince McMahon.