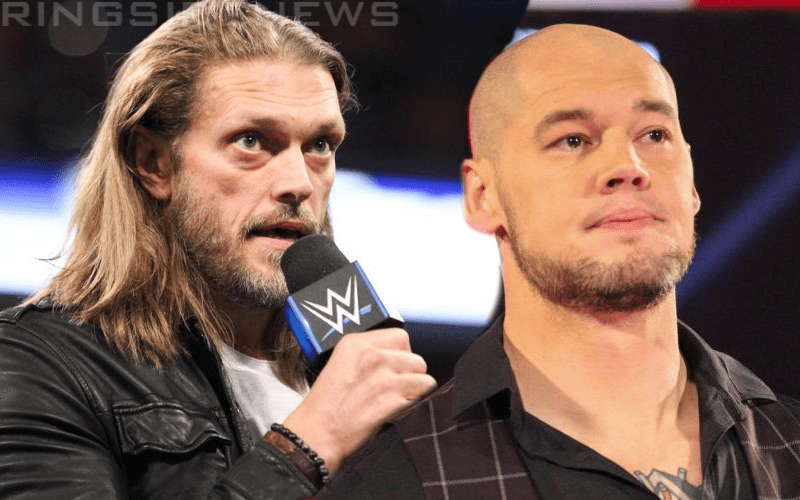 Kurt Angle announced his WrestleMania opponent this week on RAW and it went over like a lead balloon. The Chicago crowd hated hearing Baron Corbin as Angle’s farewell match and they’re not the only ones.

The internet was pretty unhappy to hear about this match as well and they have not been shy about it. In fact, WWE might even be considering a change after the backlash which was not their plan to begin with.

Edge spoke about this controversial decision on E&C’s Pod Of Awesomeness and explained that although he would have liked to see John Cena face Angle, he understands why Baron Corbin is getting the role.

“You know if you’re talking about storyline, yes it does make sense. I do however think that the name I mentioned last week makes more sense in terms of the entire span of their with John Cena […] maybe he’s in Zimbabwe or China or wherever shooting a movie with Jackie Chan.”

“In terms of if you look at it and say, right. Cena came out in Chicago to take Kurt Angle’s challenge I don’t know 18 years ago or whatever it was. For Kurt to be able to announce his WrestleMania opponent in the same building that happened it just seemed like such serendipity so there’s gotta be a reason why that didn’t happen.”

“You know I’m tired of people always knocking Corbin, man. He’s a talented dude. I know in the internet realm that’s not a popular opinion, but he’s a big, big, big man who can move and I like him. So it is great for him to be put in that slot and no matter where they go with the finish it’s a cool place for him to be.”

Baron Corbin is going to be around WWE for a very long time. Fans hate him, therefore, he is doing his job as a heel in a wonderful way. He might be getting real heat from fans, but in a Reality Era that’s just what WWE is looking for.

You never know if WWE will change their minds about this one, but Corbin is living it up in the meantime.