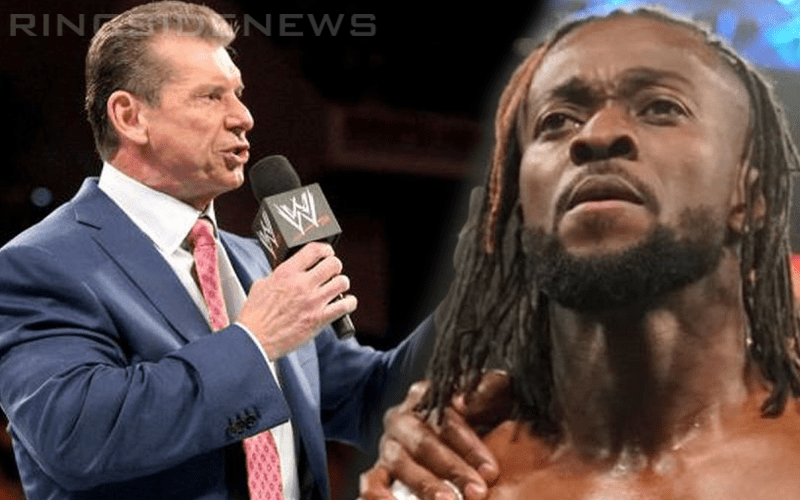 WrestleMania is less than three weeks away and Kofi Kingston’s WrestleMania opportunity was snatched out of his hands once again this week by Vince McMahon. This is actually a good thing if you look at it from Kofi’s perspective.

Kofi Kingston recently spoke to Talk Sport where his current storyline with Vince McMahon was mentioned. He was asked if he felt McMahon’s tyrant character has been played out. After all, we’ve seen this same song and dance from Mr. McMahon keeping a super popular babyface down before.

Kingston is grateful to be having this storyline with McMahon because it obviously means that The Chairman sees something in him that is worth his time.

“Well, it’s tough to say what the story needs and what it doesn’t need, I think we’re all on this wild ride together. And the fact that Vince McMahon feels the need to interject definitely speaks volumes to the impact this situation has had on the WWE Universe. Because Vince doesn’t trouble himself with matters that aren’t really worth his time.”

“So, apparently, we’ve gotten our name [New Day] on his radar which is a great thing if you ask me. To be able to go toe-to-toe with Vince McMahon on the mic is something that I never thought that I would do as a kid. You set goals for yourself as a kid and you want to be a WWE superstar, but this is one that you don’t really see coming. And it kind of came out of nowhere, this whole angle,” Kingston said. “If Mustafa Ali doesn’t get hurt, I don’t know if I’m even on the card for WrestleMania.”

It will be incredibly interesting to see how Kofi Kingston will eventually find his way to the WrestleMania main event. Even though McMahon keeps dangling a WrestleMania moment in front of Kofi, nobody else is getting booked to face Daniel Bryan in the meantime.

This could be a huge launching pad for Kofi Kingston that might see him turn a new leaf in his already impressive career. It is all up to Vince McMahon and Kofi knows that The Boss doesn’t leave the Gorilla Position for just anybody.