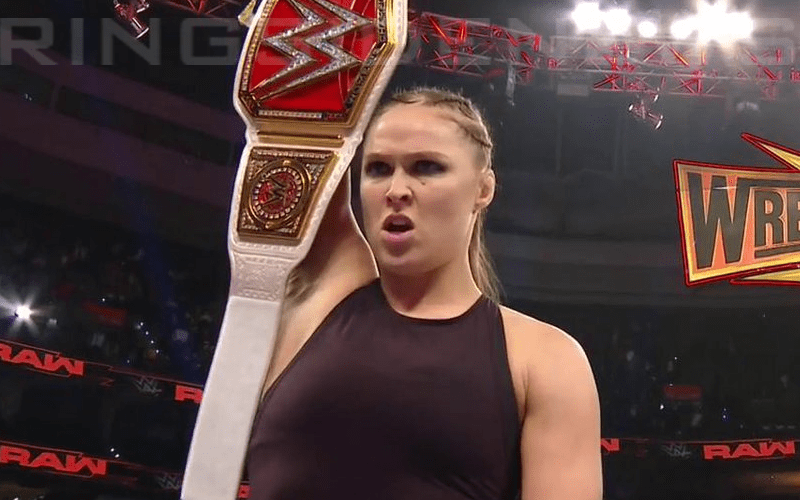 Ronda Rousey laid down the RAW Women’s Title last week because Stephanie McMahon wouldn’t put Becky Lynch back in the WrestleMania match that she earned by winning the Women’s Royal Rumble. This sparked a chain reaction that was still unwinding on this week’s show.

This week on RAW, Stephanie McMahon threw everyone for a loop when she announced that the RAW Women’s Title is now vacant, but not for long. Becky Lynch and Charlotte Flair — two SmackDown Superstars — were set to face each other at WWE Fastlane for the vacant red brand title.

Becky Lynch was forced to sign a hold harmless agreement before the match could be made official. This segment capped off RAW this week. Suddenly, Ronda Rousey was shown barreling through the backstage area.

Ronda said she didn’t vacate the title and she wanted it back. She wanted to include Becky and not exclude her. “Now give me my title back!” Which Stephanie McMahon did and then she switched up Lynch vs Flair at WWE Fastlane.

McMahon said if Becky Lynch wins at Fastlane, then she will be added to the RAW Women’s Title Match at WrestleMania. Then Stephanie got the crowd to cheer for the triple threat match. Rousey said that she has free reign to do whatever she wants because McMahon values her wallet over Becky and Charlotte’s frail little bodies.

Then Ronda Rousey cut a scathing promo on the fans. She chastised the Philly crowd for booing her at the Staples Center in LA and was not happy in the slightest.

Rousey then said, “Damn the man, screw the woo, and no more Mrs. Nice Bitch.” Rousey laid a cheap shot to Flair who left the ring, but Becky Lynch remained. As Lynch sold her injured knee, Rousey destroyed Becky in the ring with some stiff shots to the body before latching on an armbar while Charlotte Flair looked on.

To put the cherry on top, Ronda Rousey put her foot on Lynch’s head and posed with her title before continuing the assault on Lynch.

This certainly looks like the heel turn for Ronda Rousey that we were expecting. It will be very interesting to see what happens next, but odds are we are looking at a triple threat RAW Women’s Title match at WrestleMania.