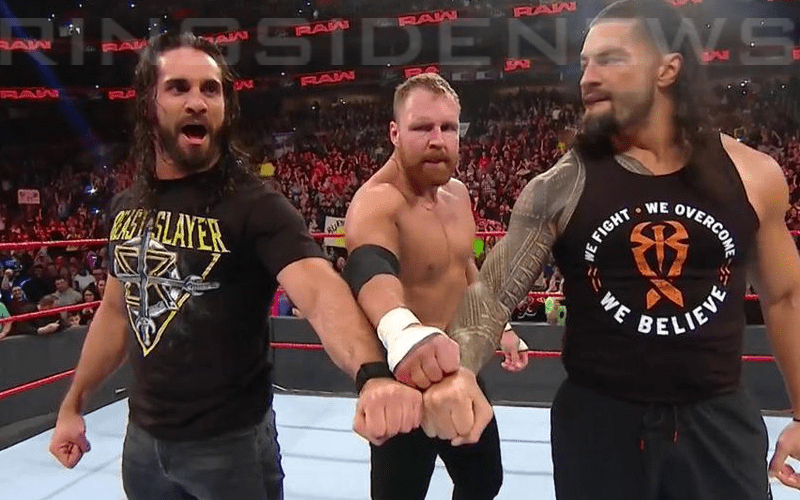 Dean Ambrose resisted reforming The Shield when he was asked about it on RAW. This was after the opening segment where Roman Reigns mentioned the fact that Ambrose was leaving WWE at the end of April.

Dean Ambrose had a match with Elias on RAW this week which was the reason why he said that he was preoccupied. He lost that match, and then Roman Reigns and Seth Rollins came out to address their brother once again.

The crowd chanted, “Shield” and Rollins said, “We gotta do this together, we only got one more shot to do this the right way.” Then Dean Ambrose paced around the ring before leaving through the crowd.

Suddenly, Baron Corbin, Bobby Lashley, and Drew McIntyre came out and stopped Dean in his tracks. The heels taunted Rollins, Reigns, and Ambrose while saying that it’s their show now.

McIntyre said they were going to offer an epic match at Fastlane, but they don’t deserve it. Then McIntyre said the heels are going to end this right now. Reigns and Rollins were outnumbered, but they fought the heels off anyway. Then they started to lose ground due to the handicap disadvantage. Suddenly, Dean Ambrose ran in for the save.

Ambrose fought off the heels and evened up the odds. They ran off McIntyre, Corbin, and Lashley before finally making The Shield’s reunion official with a triple fist bump.

Soon after it was made official that The Shield will take on Baron Corbin, Drew McIntyre, and Bobby Lashley at WWE Fastlane.