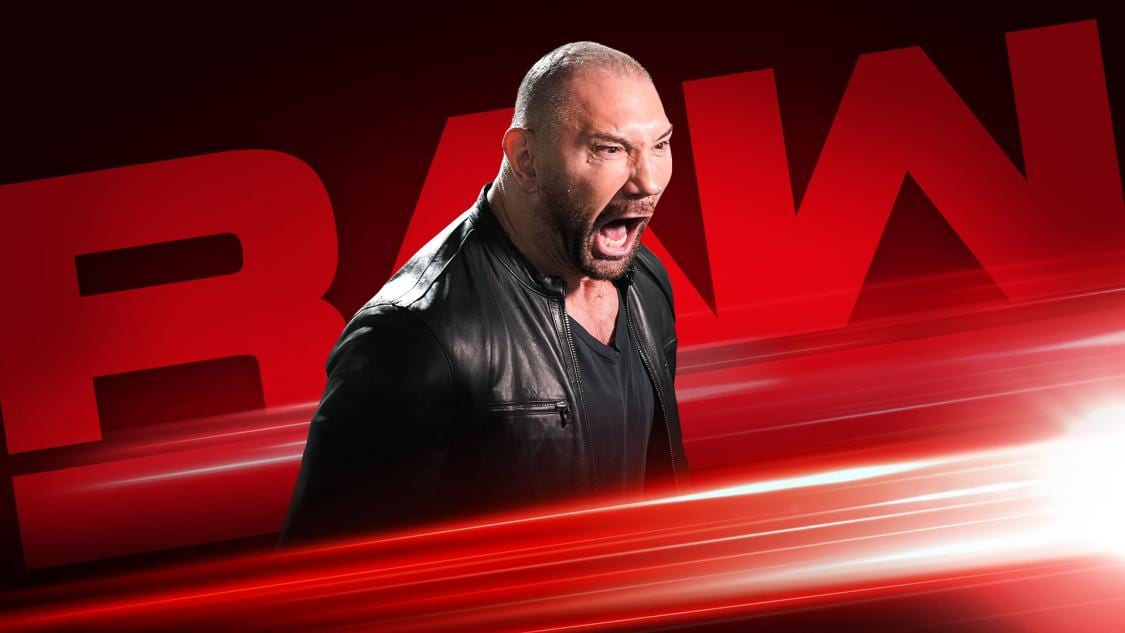 Tonight’s show will be headlined by the shocking new feud between Batista and Triple H. The Animal returned to Raw last week in a surprise no-one saw coming, and set the wrestling world alight. Tonight Triple H will respond to Batista’s attack on Ric Flair, and begin their road to WrestleMania.

WWE.com is teasing a Shield reunion following Roman Reigns’ return to Raw last week, and then later that night he and Seth Rollins saved Dean Ambrose from a beatdown. It seems WWE wants to fast track a Shield reunion before WrestleMania and before Ambrose leaves the company. Few will complain about getting to see The Shield one last time, and we’ll see the seeds continue to grow tonight.

Also on tonight’s show, Charlotte Flair is back to talk the WrestleMania main event, given that Ronda seemingly vacated her title and Becky is still AWOL. It will be interesting to see how this develops from here.

That’s the preview for tonight’s Raw! Let us know what you’re excited to see by downloading the Ringside News app and following us on Instagram! Enjoy the show.

WWE Raw kicks off with the former Universal Champion, Roman Reigns, making his way to the ring.

He’s won a #RoyalRumble Match here.
He’s won a #WWEChampionship here.#TheBigDog @WWERomanReigns is BACK in Philadelphia to kick off #RAW! pic.twitter.com/hokttMhBNn

Before Reigns gets into the ring we see a replay of him announcing his return last week, as well as him and Rollins helping Dean Ambrose. Live in the arena, Reigns gets loud cheers from the Philly crowd, and one guy booing. Roman says last week was the comeback, tonight in Philly he takes his yard back. He says he has had a long time to think about what he wants, and there’s one man standing in the way of what he wants. And that one man is his brother, Seth Rollins. So, let’s get Seth out here to address that.

Rollins makes his way to the ring and hugs Reigns when he gets there. Rollins says he is happy for Reigns and is inspired by his return to win the Universal Championship from Brock Lesnar, but he realizes what it was like for Reigns to have to relinquish the title in the first place. Reigns says Rollins is wrong about what he wants. He says Seth is amazing and he’s been so impressed by him since he left. He doesn’t want to take the Universal Championship, at least not yet. What he wants from Rollins is to get The Shield back together!

Rollins says that, after what Dean did, when he did, no way. Roman says that he’s learned that life is short, and the most important thing is your friendships and relationships. So get the band back together for one last show, and let bygones be bygones. Rollins mulls it over and says it’s hard to forgive and forget… but he knows Roman is right. He says if it means that much to Roman, he’s in. The fans cheer and Roman says it’s time to get Ambrose out here.

After a minute his music hits and Ambrose makes his way onto the stage. The Lunatic Fringe is about to speak when he is attacked from behind by Elias! The Drifter smashed a guitar across Dean’s back, then high-tailed it to the back as Rollins and Reigns ran up the ramp. Dean slowly gets back to his feet, selling the shot like a beast, shrugs off help from Reigns and Rollins, then walks to the back.

Charly Caruso is backstage with Drew McIntyre, Bobby Lashley, and Baron Corbin. She starts to ask them about The Shield reuniting, but McIntyre cuts her off and says he broke The Shield months ago. Corbin says they aren’t bothered about that, because they have a match tonight against Finn Balor, Kurt Angle, and Braun Strowman. They say they will prove why they are the dominant faction in WWE and walk off.

Finn Balor walks out, because that tag match is up next!

Weirdly, we return from commercial with Angle with Balor at ringside, and all three heels in the ring, then out comes Braun Strowman. Disjointed for no reason.

The bell rings and Corbin throws his vest at Strowman to distract him, but Braun just mows him down. Braun then clotheslines him out of the ring, then does so again and runs him over with a shoulder tackle on the floor.

The Lone Wolf tags McIntyre to take over but Braun retains control and clocks Drew with a huge right hand. Balor tags in but Drew takes him down quickly. Lashley tags in and looks for a powerbomb but Balor counters and sends him out of the ring. He also takes out Corbin so he can hit a dive over the top rope onto both Corbin and Lashley. Just as he’s celebrating, Rush trips Balor as we head to a break.

We’re back and Corbin whips Balor into the corner before hitting a huge Deep Six for a near-fall. Corbin toys with Balor as he digs elbows into his trap. Balor looks  fire up but Corbin tosses him over the ropes and onto the apron. Finn tries to leap back in but Corbin drops him with a right hand.

McIntyre is tagged in and tees off on Balor with chops. Drew lands a big suplex for a two-count, before applying a submission. Balor fights out and attacks Lashley and Corbin in the corner, before ducking Drew and tagging Kurt Angle!

The Olympian runs in and hits Drew with two German suplexes, then reverses Drew to hit a third. Angle looks for the Angle Slam but McIntyre reversed it, but then Angle rolled out of a powerbomb to lock in the Angle Lock. Lashley storms the ring to stop Angle but he gets knocked back. Drew then finally stops Angle dead in his tracks with a Glasgow Kiss and we head to the break.

Always fun to see @RealKurtAngle break THESE out on #RAW! pic.twitter.com/XmCTNnLUmd

Angle is in a chinlock as we return but then shrugs Baron off and knocks him out of the ring. Strowman is tagged in and he storms the ring, knocking Lashley and Drew off the apron, before splashing Corbin in the corner. Strowman hits Corbin with a running powerslam and tags Balor, who hits the Coup de Grace but Lio Rush pulls his foot off.

Balor is mad and chases Rush around ringside. Lashley catches Balor and slams him into the ring post. Strowman then runs around ringside at full speed but Lashley dodges him and he hits Lio rush and knocks him through the barricade and into next week! Wow!

Lashley runs back into the ring and hits Balor with the Spear for the win.

After the match, the three heels hold their hands high. Next they punch Finn Balor and toss Angle into the barricade at ringside. Corbin lifts the steel steps and Drew and Bobby run Angle head-first into them! Next they bring the bottom half of the steps into the ring. Drew hits Balor with a Claymore Kick, then they lift him up and Bobby hits a spinebuster on the steps!

Still to come, Stephanie McMahon will address the future of the Raw Women’s Championship. Also, Ricochet and Aleister Black are getting a title shot against The Revival!

Charly Caruso is backstage with Heavy Machinery. She says they seem to be in great moods but it doesn’t seem like everyone is happy to be here on Raw. She sends us to a video of The B-Team, The Ascension, and Hawkins & Ryder saying they’re tired of getting overlooked for NXT talent, then they insult how Otis looks. We cut back to the interview and Otis said that hurt his feelings. Tucker says they’re going to take on each of those teams, one-by-one and beat them all.

Natalya makes her way to the ring, and apparently she has unfinished business with Ruby Riott.

Ruby kicks off the match in high gear as she takes Natalya down and keeps her down with kicks. She then applies a submission for a minute until Natalya fights out and hits a discus clothesline. Natalya then applies the Sharpshooter and Ruby crawls towards the ropes but Nattie drags her back to the centre. Ruby turns around and pokes Natalya in the eye, then rolls her up…but Natalya reverses the roll-up and scores the pinfall.

The sassy southern belle Lacey Evans comes out as Natalya is leaving, and does her usual walk down the ramp and then back out.

We see a replay of last week’s Raw, when Batista beat Ric Flair to get Triple H’s attention. Stephanie is backstage and she welcomes two guys from SNL to the show. They banter back and forth for no real reason for a minute, then leave. Triple H walks out to the arena and we head to the break.