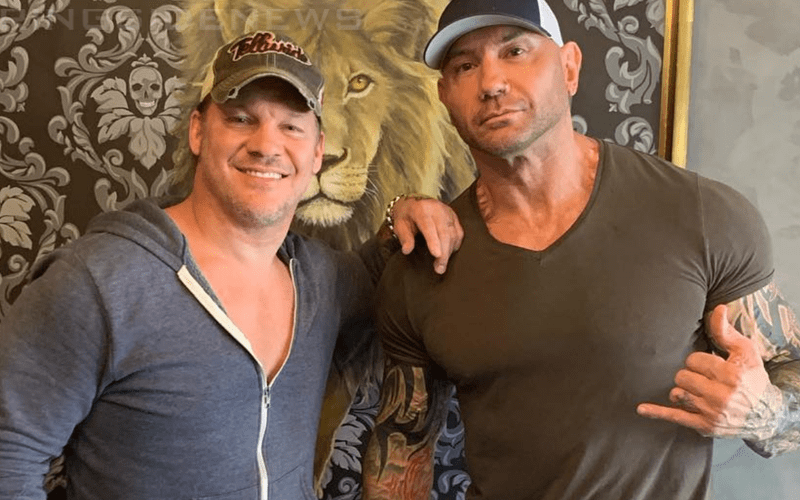 Batista is a very interesting subject of conversation right now. It appears that he wants to wrestle for WWE again, but he might only be interested in one opponent.

Triple H is injured after suffering a pectoral muscle tear at the WWE Crown Jewel event. He needed immediate surgery to correct this issue and is now training. However, return time is not certain yet. Batista dropped a huge hint on Triple H during SmackDown 1000 before The Game’s injury about having a match. Now it looks like a WrestleMania match between the two might not be possible.

With Batista’s busy movie schedule, he is another former WWE Superstar who might see a Hall Of Fame induction before he wrestles another actual match due to Hollywood commitments. However, that won’t stop him from talking to AEW.

No matter how interesting it might look, Dave Meltzer commented on Wrestling Observer Radio how Jericho and Batista are just friends and were very likely simply doing a podcast.

“I think they probably just did a podcast. I don’t know, they were hanging out. They’re friends anyway.”

“He has no deal with WWE. He’s in I guess you could say he’s sort of in talks with WWE. The name has been floated to AEW. Based on what I’ve been told I don’t believe he’s going to go to AEW. I don’t think he’s seriously considering AEW.”

“He has always talked about one last run in WWE and finishing his career with Triple H and I think that’s what he wants to do. I don’t think he really seems interested, you know.”

“I mean maybe they’ll make him a crazy offer and maybe they’ll meet him and talk him into it, but I don’t think that’s happening. I think that he’s either going to do Mania this year or I’ll put it this way if Triple H is not healthy in time for Mania for a match I don’t think he’ll do a match with somebody else. Maybe he will, but if he is I think he would like to do the final match with Triple H this year.”

AEW very well could have entered the conversation between Jericho and Batista. We might have evidence of any such mention as well if it was recorded for Talk Is Jericho. However, a jump to AEW doesn’t seem like something Batista would be interested in right now.

We will have to wait and see, but we will keep you updated on all of the latest on this situation here at Ringside News.