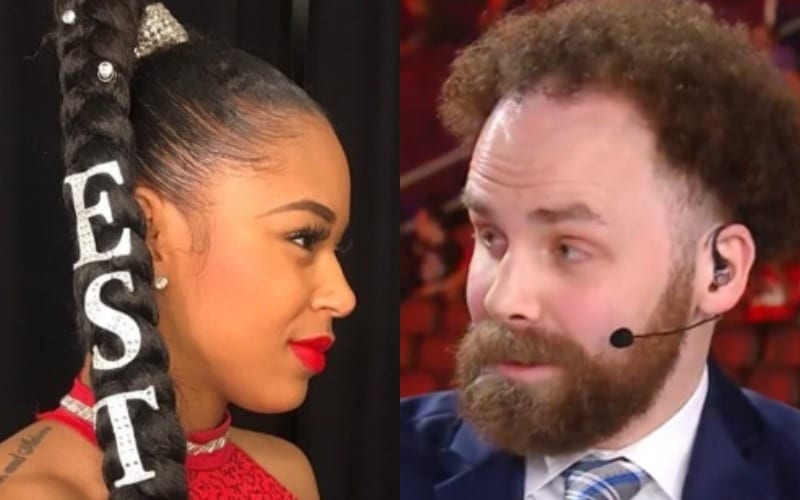 Bianca Belair had a grueling match against Shayna Baszler at NXT TakeOver: Phoenix, but Sam Roberts was not impressed with the match before the event. As part of the kickoff show panel, Roberts said that Belair isn’t TakeOver quality and doesn’t belong in a title match.

Plenty of people responded to this and Belair told Roberts that he can “kiss my ass.” There was also some heat on him backstage over these comments..

Roberts spoke about this situation during Not Sam Wrestling where he remained unapologetic for speaking his mind. He also went on to discuss some of the backstage tension after he made those statements about the EST of NXT.

“Look, WWE brings me to those, invites me to those kickoff show and they ask me to give my opinion on things. On Saturday night, I was not fed an opinion in my ear. I know that’s one of the theories. I have never been fed an opinion in my ear. They wouldn’t bring me in to give their opinion, I’m no good at that. I go on and they ask me to just be me and give my opinion.”

Roberts said that we will have to ask him in March if Bianca Belair belongs on a TakeOver special. It doesn’t seem like her performance in Phoenix did anything to change his mind.

Roberts continued saying that he had “conversations” with some people after making those statements as well. This might not have been the best situation, but Sam isn’t going to let it bother him or sway his opinion.

“There were people after the show who had conversations with me about ‘the way’ I said what I said. The fact is that I said that I said so you know it kinda is what it is. It’s exactly as you saw it and that’s kind of it. Was everybody thrilled with it? No. That’s what I mean about having conversations but those are again maybe things I don’t want to get into at this moment. However, we’ll see how things go as we move forward.”

Sam Roberts was brought in to give his opinion on NXT TakeOver: Phoenix and he certainly gave it. He might have become a little overzealous in the process, but it is what it is. He is not apologizing for what he said and we will just have to see if he is invited back for any future kickoff show panels.